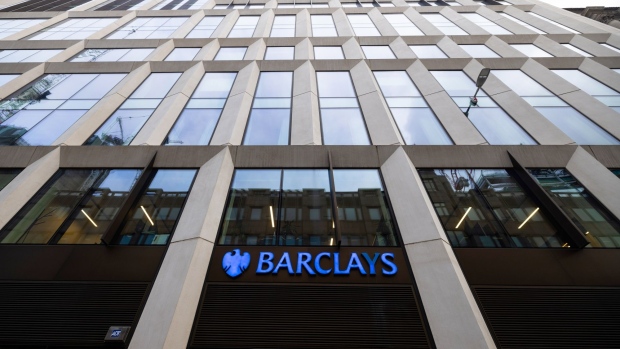 A Barclays Plc bank branch in London, U.K., on Monday, Feb. 14, 2022. European banks have largely thrived in the pandemic thanks to a flurry of dealmaking and unprecedented taxpayer support for the economy. Photographer: Chris Ratcliffe/Bloomberg , Bloomberg

(Bloomberg) -- Barclays Plc expects to start its promised billion-pound ($1.2 billion) share buyback from the end of May, once it files the correct paperwork on security sales that led to a 450 million-pound loss.

The bank said it will lodge its amended forms with the US Securities and Exchange Commission by the end of this month, following weeks of discussions with the regulator. It expects to start buying back shares “shortly thereafter,” it said in a statement on Monday.

The update clarifies the timing of Barclays’ buyback, which was announced in February but delayed after the London-based bank discovered it had mistakenly issued about $15 billion more structured notes and exchange traded notes than it had registered for sale. The lender is required to repurchase affected securities at their original price.

Chief Executive Officer C.S. Venkatakrishnan had previously said that the share repurchase would be restarted “as soon as practicable” and once Barclays resolved its filing requirements with the U.S. authorities.