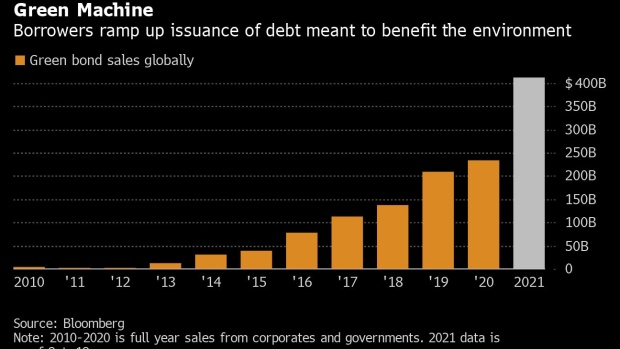 (Bloomberg) -- Demand is so strong for green bonds, or debt that funds environmentally friendly projects, that investors are accepting lower yields for securities that are harder to trade, according to Barclays Plc.

The results confirm what investors have long suspected: that more investors in green bonds are of the buy-and-hold variety, including pension funds, asset management arms of insurance companies and mutual funds, rather than active traders. But the findings also imply that if many investors decide to liquidate their holdings at some point, they may be disappointed by demand in the secondary market.

Newly issued green bonds denominated in U.S. dollars do trade more often than the broader market, Barclays found, but after three months that shifts, with the environmentally-linked debt trading with reduced frequency. For euro-denominated debt, green notes trade less than average from the start.

Borrowers are taking advantage of the robust demand to fund environmental projects. Corporations and governments globally have sold a record $411 billion of green bonds so far this year, compared with $234 billion raised in all of last year, data compiled by Bloomberg show. Global sales of environmental, social and governance bonds are also at a record and are expected to hit $1 trillion by end of this year.

Firms have long been able to get cheaper funding by selling green bonds, but even with record issuance that benefit has only shrunk marginally, by just 1 basis point from the peak of 5 basis points earlier this year. Barclays expects demand to support a greenium of 4 basis points to 5 basis points over the medium term, assuming elevated issuance.

The strategists screened the U.S. high-grade market for green bonds trading with yields well below similar non-green debt, on the thinking that the divergence “is likely not justified” longer term.

“For holders of green bonds who are less concerned about the green label, swapping into similar maturity non-green bonds makes sense, in our view,” wrote the strategists.

Goldman Sachs Group Inc. is tapping the U.S. investment-grade bond market, following peers Bank of America Corp. and Morgan Stanley in selling new debt after posting third-quarter results. The bank is selling bonds in as many as five parts, according to a person familiar with the matter.

Europe’s primary market saw its first deal being postponed since the summer, with Triodos bank postponing a green tier-2 note, taking the shine off a flurry of new mandates mostly from the financials sector.