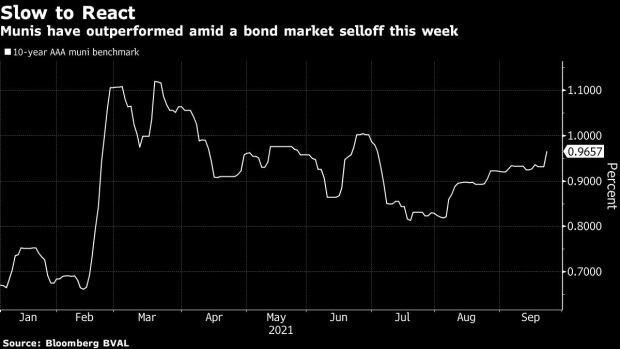 (Bloomberg) -- Pressure is building for the municipal-bond market after a selloff in U.S. Treasuries this week, according to Barclays Plc.

Rates market volatility is one of the challenges facing state and local debt performance in the near-term, according to a Sept. 24 note by strategists Mikhail Foux, Clare Pickering and Mayur Patel. Municipal bonds have posted losses this week but outperformed U.S. Treasuries, which sold off after the Federal Reserve announced it could begin scaling back asset purchases in November.

The bonds were able to “hold their ground relatively well” amid the bond market selloff, the Barclays strategists said. Benchmark AAA yields have climbed as much as five basis points higher since the start of the week.

“However, if rates remain under pressure, at some point tax-exempts will have to follow,” they said.

The Barclays strategists also pointed to more supply as a challenge facing the market, given that the volume of bond sales tend to pick up in October, which can weigh on performance. But any selloff over the next four to six weeks could be a buying opportunity, they added.

“In general, we are not overly concerned, as we see this as a temporary dislocation,” they said.