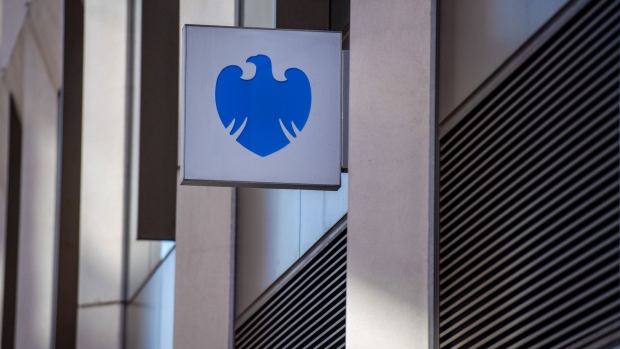 A sign outside a Barclays Plc bank branch in the City of London, U.K., on Tuesday, April 26 2022. Barclays is one of the banks along with, HSBC Holdings Plc Lloyds Banking Group Plc and NatWest Group Plc reporting earning this week. Photographer: Chris J. Ratcliffe/Bloomberg , Bloomberg

(Bloomberg) -- Barclays Plc said any rollback of US tariffs on Chinese goods will have only a modest impact on US inflation and the yuan.

If there’s a complete rollback of tariffs, the maximum direct effect on US inflation is a one-time reduction of 0.3 percentage point, Barclays’ analysts including Jayati Bharadwaj wrote in a note. They cited the relatively small share of Chinese imports in the US consumption basket as a reason for the marginal change.

The effect on US inflation is “a drop in the bucket,” the analysts said, and would likely be immaterial for monetary policy deliberations. A partial removal of tariffs may result in an even smaller drag on inflation, closer to a few-tenths, they said.

For the Chinese currency, the potential improvement in US-China trade relations is also “not a yuan supercharger,” Barclays said. If tariffs were removed on both sides, China’s current account surplus would gain by about $90 billion, the analysts estimated. That would imply an appreciation in the yuan of 1.8%, although the actual impact could be smaller since any potential tariff removal would be delivered in a staggered approach or limited to a subset of Chinese products, they wrote.

A sharp yuan appreciation would likely be resisted by China’s central bank, which seeks stability in the exchange rate, they argued.

US President Joe Biden could announce his decision to roll back some tariffs on Chinese imports as soon as this week, while at the same time begin a new probe into industrial subsidies. Chinese Vice Premier Liu He discussed economic sanctions and tariffs in a call with Treasury Secretary Janet Yellen on Tuesday.