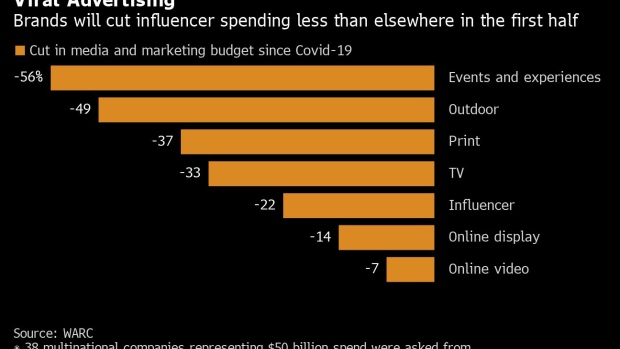 (Bloomberg) -- Advertising has mostly collapsed, but brands are still spending -- just not on billboards, newspaper ads or TV spots. This has opened a new frontier for social media influencers, the newcomers to the ad game, that could help them bounce back when the crisis eases.

The great pullback in advertising budgets hasn’t been evenly distributed. Spending on platforms such as Facebook Inc.’s Instagram and ByteDance Inc.’s TikTok is down, even for influencers, just not as much as traditional media.

It’s partly about following the consumer. There’s not a lot of motivation to freshen up a billboard when streets are so empty. Cinema screens are dark, and there are hardly any commuters to read the free newspapers handed out at rail stations. However, social media usage has surged.

Though there’s still less impetus for, say, travel destinations to ink deals with social media stars when the airline industry has all but ground to a halt, some brands that would never have considered an arrangement with an influencer are giving them another look.

Before Covid-19, companies might have considered influencers, and their large fan bases, a “support mechanism” rather than something that’s central to brand planning, said Frances Sinclair, a strategy partner at Dentsu Group Inc. agency Carat. The sudden economic shock and lifestyle upheaval wreaked by the virus is changing that.

“We’re seeing brands shift their investment from more-traditional media channels, which might not make sense to them at the moment, to being in an influencer environment where the engagement is very real-time and ready,” she said.

It’s also important to change the content of a campaign to reflect the reality of life under lockdown. For example, standard ad campaigns featuring carefree, optimistic people mixing freely outdoors are on the back burner in a post-virus world marked by job insecurity, health fears and uncertain prospects.

Italian pasta company Barilla is a case in point. A year ago, the brand was wooing consumers with a glossy television spot which showed tennis champion Roger Federer cooking its spaghetti at a mansion reception with top chef Davide Oldani.

Recently, she’s been showing off her homemade Barilla spaghetti dinners instead.

“One of the reasons brands use influencer marketing in this moment is that it’s fast to activate and solved the issue of production that was on halt,” said Alessio Gianni, the company's digital and content marketing director. “Content is more spontaneous, close to the people. Chiara, being Italian and locked at home as everyone else, cooked herself a carbonara. It was the best person to involve.”

Sky is using digital channels like Instagram and getting near real-time feedback in a way it hasn’t before, said Dentsu’s Sinclair.

Influencers were a rare bright spot in M&C Saatchi’s April market update, which cited "steady" business in the newer channel despite “a sharp drop in demand across the group.”

S4 Capital Plc’s CEO, Martin Sorrell, said some European clients started to change their thinking on influencer marketing that month, accelerating a digital transformation of advertising that was already underway. S4’s IMA agency has picked up work on an influencer campaign to promote HP Inc. laptops.

“We certainly saw that on the influencer side -- so whereas I think it was pretty dead in the back-end of March, it got pretty lively as we got into April,” he said.

Influencer marketing can still be a minefield given how easily a brand campaign can appear cynical and turn off followers. With billions of people tiring of lockdowns and worried about coronavirus, companies can’t look like they’re seeking to profit from a miserable situation.

“A lot of the feedback the influencers receive from their audiences is: ‘How can you go on like everything is normal, saying to buy this candle, or this make-up?” said Robert Levenhagen, CEO of marketing software company InfluencerDB.

That's limiting any boost the medium can receive from the current situation. M&C Saatchi's Thompson said lots of social media stars are shunning commercial ventures in favor of charity and community work.

It’s taken years to convince many companies that there’s as clear a return on investment in influencers compared to TV or other forms of digital advertising. It’s been easy for influencers to buy “fake followers” and generate artificial engagement activity, making it hard to assess their true audience reach and impact.

There’s always the risk they’ll do something dumb that gets a company all the wrong kind of publicity. That’s made some traditional brands reluctant to jump in, according to Hayley Brady, a partner at Herbert Smith Freehills who advises companies on digital advertising.

In 2015 Kim Kardashian promoted a morning sickness treatment but failed to mention its side-effects, earning a reprimand from the FDA. Then there’s the bad behavior: YouTube star Logan Paul lost advertisers in a controversy sparked by posting a crude video which showed a dead body in a Japanese forest known for suicides.

Still, the ability of influencers to pivot quickly to match popular sentiment is what’s boosted their appeal for some brands in the current environment. This bodes well for their outlook when the worst of the pandemic is in the past.

“Influencer marketing spend will come back quicker,” said Dafydd Woodward, global head of INCA, the influencer division of WPP Plc's GroupM. “It's agile, because we can create content very very quickly that reflects the mood of the nation, and the messages that are being put out by governments.”