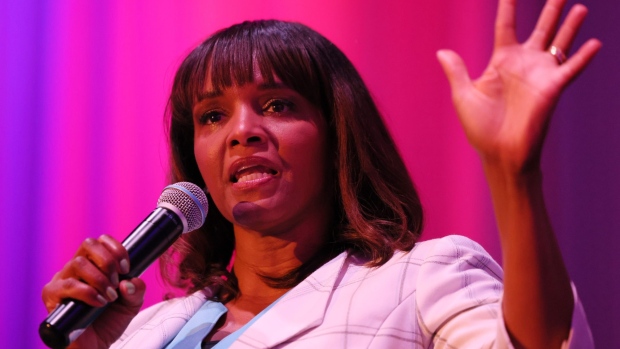 (Bloomberg) -- Political commentator Kathy Barnette, who has surged into a three-way tie in Pennsylvania’s closely watched Republican U.S. Senate primary, defended most of her previous incendiary comments as taken out of context as she faces new scrutiny.

Speaking on “Fox News Sunday” ahead of Tuesday’s GOP primary, Barnette said the “overwhelming majority” of the comments for which she’s now being criticized are old and not complete thoughts and that she hasn’t embellished her record as critics say.

“They’re mad because I didn’t ask for permission to be in this space,” Barnette said. “I just walked in because this is my country, and our country is in trouble.”

Two polls last week showed Barnette has surged into a three-way statistical tie with celebrity physician Mehmet Oz and former Bridgewater Associates Chief Executive Officer David McCormick. She emerged as an alternative through tenacious campaigning despite being vastly outspent by her two rivals battling each other.

Her rise has brought new scrutiny, including by detractors who say there’s too much unknown about her and she’s too far to the right. Her critics say that if she were the GOP nominee, Barnette would lose a general election in November that Republicans need to win to retake control of the Senate.

In social media posts, Barnette falsely called former President Barack Obama a Muslim and said he “loves all things homosexual” and that Islam “should be banned in the USA.” She shared an article that said “pedophilia is a cornerstone of Islam.”

Barnette told Fox that the comments about Obama were made during a time the federal government was accepting Syrian refugees the FBI said couldn’t be vetted and Americans were on edge with a series of mass shootings.

Barnette has echoed former President Donald Trump’s baseless claims of election fraud and organized buses to the “Stop the Steal” rally on Jan. 6, 2021, that preceded the attack on the U.S. Capitol. She also refused to concede her 19-point loss in a 2020 House race.

Campaigning in suburban Philadelphia on Saturday, Oz said Barnette’s past comments should be disqualifying. He also said Republicans shouldn’t “roll the dice” and nominate someone who hasn’t been thoroughly vetted and who he said would lose in November to expected Democratic nominee John Fetterman, the commonwealth’s lieutenant governor.

“We would lose the general election in part because she’s an unknown,” Oz said in an interview. “We don’t know anything really about her biography. And every time she answers a question, she raises more.”

Trump, who endorsed Oz in the race, also has said that while Barnette will have a “wonderful future in the Republican Party” and he’ll support her if she’s properly vetted, she can’t win the general election in Pennsylvania.

Barnette said she’s been traveling 1,500 miles a week across Pennsylvania talking to voters and they’re worried about illegal immigration, inflation, the lack of baby formula and other kitchen-table issues, not her tweets.

“We have some very real issues, and that is the reason why I’m surging and doing so well is because throughout this entire time, I’ve kept the main thing the main thing, and that’s Pennsylvania,” Barnette said.