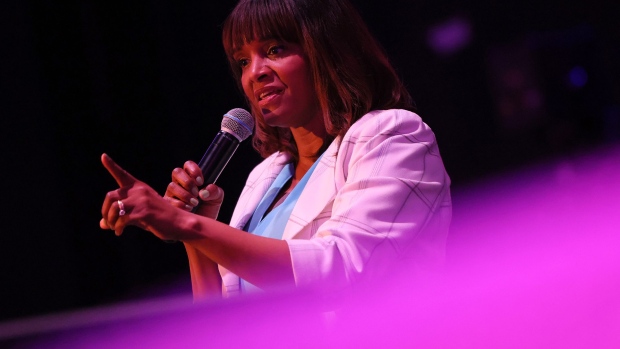 (Bloomberg) -- Political commentator Kathy Barnette, who has shaken up Pennsylvania’s Republican US Senate primary, said she would not support Mitch McConnell as GOP leader in the chamber, and that Donald Trump made a mistake in not endorsing her.

“He is not Jesus, so he gets to be wrong, and on this, he’s wrong,” Barnette told reporters after her final campaign event in Scranton before Tuesday’s primary. “The people of Pennsylvania get to choose.”

But Barnette has risen to make the GOP contest a three-way statistical tie in two polls before Tuesday’s primary. She said of Trump that “I look forward to receiving his phone call tomorrow night, congratulating me.”

Asked whether she would support McConnell, Senate Republican leader, if she wins the primary and the general election in November, Barnette said “no” and that “perhaps we need to turn the page” on his leadership.

Her sudden elevation has brought new scrutiny to her campaign, including criticism of her past homophobic and anti-Muslim comments and her support for Trump’s false claims the 2020 presidential election was stolen. Barnette said she was at the “Stop the Steal” rally in Washington on Jan. 6, 2021, before a mob of Trump supporters stormed the US Capitol but that she didn’t go inside.

“The long knives are out because we’re winning,” she said of the criticism.