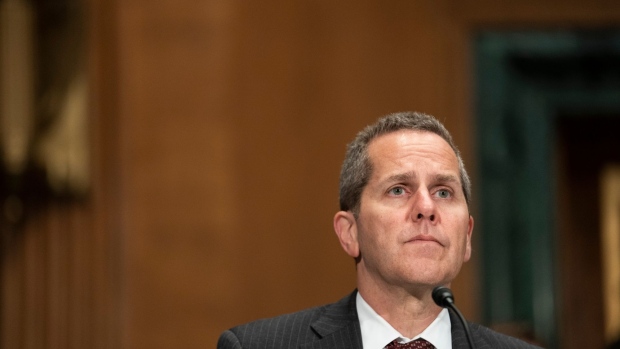 Michael Barr, vice chair for supervision at the US Federal Reserve, left, speaks during a Senate Banking, Housing, and Urban Affairs Committee hearing in Washington, DC, US, on Tuesday, Nov. 15, 2022. Top Federal Reserve officials renewed notes of caution on cryptocurrencies, noting risks from speculation the need for stronger guardrails while calling for clear legislative action for any digital dollar. Photographer: Sarah Silbiger/Bloomberg , Bloomberg

(Bloomberg) -- Federal Reserve Vice Chair for Supervision Michael Barr said the central bank has more work to do in tightening monetary policy, though it could slow the pace of its rate increases later this month.

“We’re in restrictive territory. The question we’re working on is: is it sufficiently restrictive? How much more restrictive do we need to be in order to see the kinds of changes in the economy that will eventually lead to a reduction in inflation,” he said Thursday in response to a question following a speech at a virtual event hosted by the American Enterprise Institute in Washington. “I think that we have some work still to do on that. So we’re not done.”

Fed officials have been raising interest rates quickly this year in a bid to bring inflation down from the highest levels in four decades. They are widely expected to lift the central bank’s benchmark rate by a half-point, to about 4.4%, when they next meet Dec. 13-14. That would mark a smaller increase than the three-quarter point hikes they’ve undertaken at each of their last four policy meetings.

Barr said it made sense to slow the pace of rate increases, potentially as soon as the Fed’s next meeting, while stressing that this should not be mistaken for any slackening in the central bank’s resolve to bring price pressures to heel.

“I think that the rate is going to have to stay high for a long period of time,” he said. “We’re not thinking about loosening. We’re still very much 100% focused on getting to a sufficiently restrictive rate and staying at a restrictive rate for a long-enough time to bring inflation down to 2%.”

His remarks chimed with comments earlier on Thursday by New York Fed President John Williams, as well as Chair Jerome Powell. He signaled on Wednesday that the Fed will slow the pace of rate increases this month while stressing borrowing costs will need to keep rising and remain restrictive for some time to beat inflation.