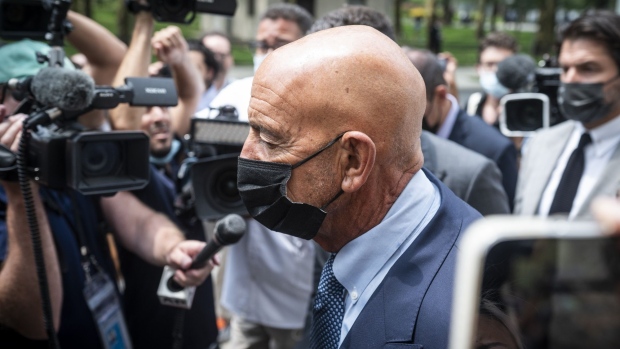 Tom Barrack Jr., founder of Colony Capital Inc., departs from criminal court in New York, U.S., on Monday, July 26, 2021. Barrack pleaded not guilty to charges that he illegally lobbied the U.S. government on behalf of the United Arab Emirates and lied to investigators about it. , Bloomberg

(Bloomberg) -- Tom Barrack, the businessman accused of acting as an unregistered agent of the United Arab Emirates, asked a judge to modify his $250 million bail bond to make it easier for him to do complex deals as they arise.

Barrack, founder of the investment firm Colony Capital Inc., wants permission to travel for business meetings and to conduct financial transactions, according to a court filing by his attorney, Daniel Petrocelli.

“These modifications will allow Mr. Barrack to fulfill his obligations to his minor children who reside and attend school in Los Angeles, to have adequate time to meet and prepare with his Los-Angeles and New York-based attorneys, and to allow Mr. Barrack to return to work,” Petrocelli wrote Friday to the judge in Brooklyn, New York, overseeing the criminal case.

Under the proposal, Barrack would seek government consent to engage in any financial transactions of more than $2 million, except for paying his lawyers and deals involving publicly held securities. For transactions between $1 million and $2 million, he would notify the government within 48 hours, including the date of the deal, the amount and the recipient.

He’s forbidden from making transactions in excess of $50,000, except for paying his lawyers and deals involving publicly held securities, under the current bail terms.

Petrocelli said court officials and prosecutors have agreed to his request to modify the bail terms. Barrack, 74, was indicted in July on charges of failing to register as an agent, as well as obstruction of justice and lying to federal officials during a 2019 interview. He pleaded not guilty and denies wrongdoing.

Barrack stepped down as chief executive officer of Colony in 2020 and then as executive chairman earlier this year. The company has been renamed Digital Bridge Group Inc. In a July interview with Bloomberg TV, Barrack said he was starting a new family office that would work with investors in the UAE, Saudi Arabia, and Qatar.

“Mr. Barrack runs a business that often requires complicated and significant financial transactions, as well as substantial payroll and monthly costs, and the success of his business depends on his ability to invest quickly in distressed and other assets,” Petrocelli wrote.

Barrack’s bond was secured by $5 million in cash, $21 million in units of DigitalBridge Group Inc. as well as his Santa Ynez, California, property and homes owned by his ex-wife Rachelle Barrack, his son Thomas Barrack III, and Jonathan Grunzweig, an executive at DigitalBridge Group who was set to leave the firm, according to a person familiar with the matter.