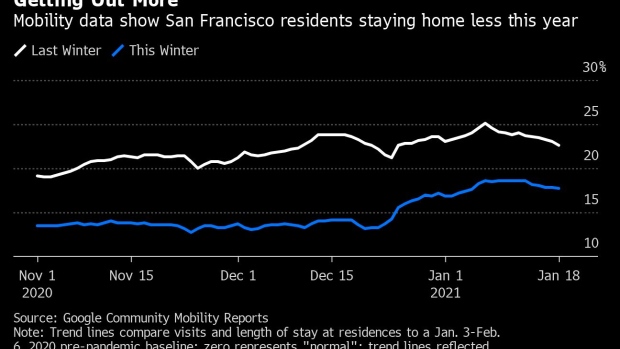 (Bloomberg) -- Packed bars in San Francisco. Popular hot yoga classes in Boston. Signs are mounting that many Americans in highly vaccinated places are grasping for a near-normal life, even as the most contagious Covid surge yet passes over.

Ellen Murphy, a 73-year-old in New York’s Brooklyn Heights who scrupulously stayed home during previous surges, will fly to her niece’s Florida baby shower next month.

“Maybe this is some level of magical thinking, but I’ve done everything that I’ve been told to do,” she said. “I got my shots, I got my booster, I wear my mask, I don’t go into crowded places with people I don’t know. It’s kind of like, what else can I do?”

Data from businesses and social media and interviews across the nation show a population accommodating Covid. Several factors have caused people to rethink: Omicron spreads so readily that catching it can seem all but inevitable for everyone but hermits. Inoculations and previous infections lower risk of severe disease. And it has been a very long two years of putting off get-togethers and trips.

Recent numbers show the desire to break free: The people-connecting platform Meetup reports that RSVPs were up 22% nationally in the first week of this month compared with a year ago -- 20% even in careful New York City. Restaurant traffic suggests that dining out lost ground when omicron hit, but it has begun to rebound in the past week. In San Francisco, mobility data show that even with a recent omicron-period drop, residents are spending less time hunkered down.

This is how many expect the pandemic to peter out: Covid remains, but becomes milder, and bit by bit, people don’t let it rule their lives.

“There will be no banners flying in the street, no parade, no V-J Day in Times Square moments,” writes Ethan Craig, a University of Pennsylvania rheumatologist. “Rather, it will end with a critical mass of small lurches toward normalcy, made by each and every one of us, one small decision at a time.”

Mark Robinson, 59, has done his deciding.

“I just want to go back to being normal again,” Robinson said over a beer at the 500 Club, a bar in San Francisco’s Mission District where barely a stool was free on a recent afternoon.

Indeed, data from the past week show that San Franciscans are getting out more than they did a year ago. They’re still spending more time at home than before the pandemic, but 5 percentage points less than last January, according to Google Community Mobility Reports. That’s despite the fact that the virus is about seven times more prevalent.

In Dearborn, Michigan, customers at Famous Hamburger increased last month despite surging cases, and they’ve remained plentiful, said owner Mohammed Hider, who has gone back to normal activity himself.

“People here want to live their lives, and they are going to frequent restaurants that are doing it right,” he said. “We have to fight this virus just like it wants to fight us. We need to try to put it behind us, get vaccinated and move forward.”

In Europe, governments are enabling citizens to push through. Ireland on Saturday dropped most pandemic restrictions, days after England outlined plans to end mask requirements in shops and mandatory isolation for positive cases. France is also relaxing curbs even after a record number of cases last week. In the U.S., health officials last month halved isolation restrictions for asymptomatic people to five days, and also cut the time that close contacts of victims should quarantine.

In 2020, she said, following the science meant social distancing and other tactics to flatten the pandemic curve. In 2021, it meant pushing for vaccinations. And now, “it means that we need to do our best to try to get back to as normal a world as we can, especially for the kids.”

Her fellow physicians tend to be risk-averse, Perkins said, “but I do feel like more and more people who have been ultraconservative in their response to Covid, and their fear, are starting to acknowledge that it might be time to loosen up a bit.”

Some are looser than others.

Jill Smagula, 44, said the two bars where she works in San Francisco’s hard-partying Marina District have been “pretty packed,” especially during football games.

“Everyone’s vaxxed and boosted and a lot of people have already gotten it, and it’s just a way of life now,” she said. “Especially for people who go out in bars, it doesn’t really seem like it’s deterring too, too much.”

Since getting vaccinated, Smagula has been going to the gym and the movies, but canceled a Las Vegas trip this month. She said people are forgoing the “unnecessary kind of adventures and gatherings” -- but not bar crawls.

Rapid tests can allay the cautious crowd’s concerns. In the Boston suburb of Brookline, a group of fathers that’s been playing poker for 20-odd years is continuing to meet every other week. Now, to be safe, they swab their nostrils first.

They considered stopping the game -- 25-cent antes with a $1 raise limit -- when omicron hit, said actuary Scott McInturff, but “some things are more important than being so risk-averse that you won’t do anything.”

Also returning to prepandemic life: many in-person class members at Down Under School of Yoga, a Boston-area chain of three studios. Classes are filling to about three-quarters of prepandemic levels, said founder Justine Wiltshire Cohen.

“There’s now a palpable feeling of, ‘We’re ready to return to the mat,’” she said.

In New York, it’s easy to assume from somnolent Manhattan that the city is still largely shut down. Mobility data from the other four boroughs show that while Financial District office towers may be desolate, people are out and about in their home neighborhoods.

For Dina Lyon, a 35-year-old marketing executive in Park Slope, Brooklyn, a turning point came when her family of three all caught Covid in October. Lyon and her husband, both of whom were vaccinated, felt very sick and were afraid for 16-month-old Zoe, who is too young for a shot.

“That’s what we’re trying to avoid this whole time, and then it just happened,” said Lyon.

All three made a full recovery, and Lyon and her daughter soon traveled to California and Mexico.

“That thing that we had been pausing our life for happened,” she said. “Maybe we can start living our life a little bit now.”