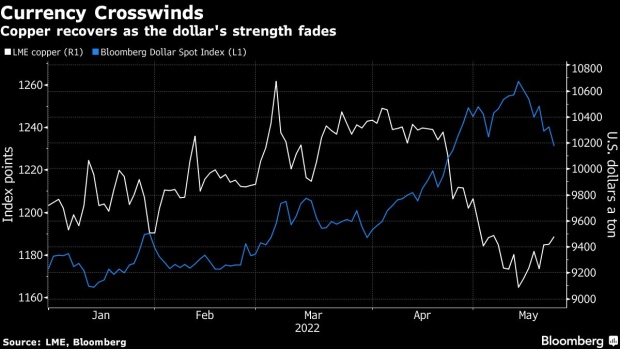 (Bloomberg) -- Most base metals extended their rebound from a five-month low as the demand outlook was bolstered by a weaker US dollar and China’s loan-rate cut. Nickel slumped, paring last week’s gain.

The Bloomberg Dollar Spot Index fell to the lowest level in nearly a month, making commodities priced in the US currency relatively cheaper for many buyers.

Prices “are finding support from the weaker US dollar and appear to be still profiting from the unexpectedly sharp reduction of the longer term loan prime rate in China on Friday,” said Commerzbank AG analyst Daniel Briesemann in a note Monday.

The recent rally comes after metals fell to the lowest level since December on May 12, as China’s bid to tackle its worst coronavirus outbreaks in more than two years roiled demand. Prices this month have also been impacted by concerns over recession in the US and Europe as central banks tighten policy to deal with the hottest inflation in decades.

The receding dollar is supporting the rebound in base metals, and the magnitude of China’s loan-rate cut slightly exceeded expectations, researcher Shanghai Metals Market said in a note. Still, the rebound might be short-lived as risk appetite continues to wane, it said.

The International Aluminium Institute (IAI) reported on Friday, 5.6 million tons of aluminum were produced worldwide in April, exactly the same figure as last April. The highest amount on a daily basis for one year is attributable to China, where aluminum production has reached a record high of 109,700 tons per day, wrote Briesemann in Monday’s note.