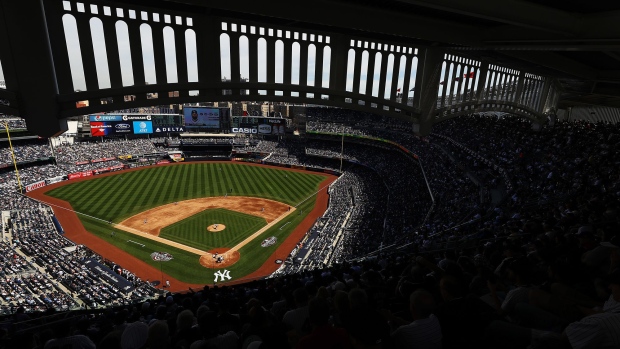 (Bloomberg) -- The dawn of the streaming era once promised a brighter future for sports fans, a blissful world of à la carte consumption in which everyone could break free of their overstuffed, overpriced cable subscriptions and pay only for what they really wanted to see.

The reality, as baseball diehards are discovering this season, is much less idyllic.

To watch all the games they want, many fans will have to pay not only for cable but also for multiple streaming services. And once they’ve figured out which app or channel is showing their favorite team, they will be left hoping that the live stream doesn’t crash at a crucial moment. Last month, in the third and fourth innings of Apple Inc.’s first baseball broadcast, some viewers found themselves gazing unhappily at a dreaded error message.

The current fragmented landscape can be traced back, in part, to last year when ESPN decided to scale back the number of games it would broadcast as part of a new contract. Afterward, Major League Baseball sold a large portion of those games to Apple and to Comcast Corp.’s Peacock. This season, New York Yankees fans will also need a third streaming service because Amazon.com Inc., which owns a stake in the team’s cable channel, started streaming a package of 21 games that will air exclusively on Prime Video.

Subscriptions to Prime Video start at $9 a month. Peacock’s Sunday slate will be behind a $5-a-month paywall. The games on Apple are free.

Jack Carroll, 65, never misses a Yankees game. But to watch his favorite team this season, he’s had to enlist his son, John, to moonlight in filial tech support.

Recently, John spent 20 minutes on a video chat explaining to his father in New Jersey how to sign up for Apple TV+. Afterward, John tweeted: “Please have sympathy for me and the thousands of other children of boomer Yankee fans going through the same thing tonight.”

“He finds it all very confusing and bewildering,” John, 36, said later in an interview. “It makes me wonder what older fans are doing if they don’t have younger children who know this stuff.”

The current arrangement has intensified the debate over how sports leagues and broadcasters should best strike a balance between reaching a younger generation, weaned on streaming, while continuing to serve an older demographic, still tethered to their traditional TV packages. The median age of baseball fans is 57, the oldest among the major sports, according to a study last year by the advertising buyer Magna.

“The old-time Met fan living out in Plainview, he’s gonna be raising hell a week from Friday,” Russo said on his SiriusXM radio show before Apple’s first broadcast between the New York Mets and Washington Nationals. “And then baseball wonders why everyone’s so upset.”

From the start, baseball was one of the earliest adopters of streaming. The league has been making its games available online since 2002—five years before Netflix began offering an online option.

Noah Garden, chief revenue officer for Major League Baseball, said in an interview that the league decided to push deeper into streaming this season, in part, to be less vulnerable in the years ahead to cable-TV blackouts. In some cases, disputes between cable-TV companies and local sports channels have left fans unable to see their teams for long stretches.

“We’re very focused on reaching a wide variety of fans and streaming gives us the ability to do that,” Garden said.

Garden said Apple’s broadcasts, in particular, are meant to reach a new, younger audience. On screen, the games show probability odds. They also feature a booth with announcers aiming to be “less technical and less hardcore,” he said. So far, the newcomers have gotten mixed reviews from fans.

The current annoyances faced by baseball fans are similar to issues cropping up in other sports as well.  Three years ago, Bethany Ball, a tennis fan who lives in Nyack, New York,  canceled her cable subscription and signed up for Tennis Channel Plus. Launched in 2014, the streaming service, which is owned by Sinclair Broadcast Group Inc., costs $110 a year and promises subscribers that they can see thousands of matches each year from around the planet. But Ball soon realized that although she could watch early rounds of tournaments on the app, the finals often required a cable subscription. Seeing the majors required adding even more services. Eventually, she signed up for Peacock to watch the French Open and ESPN+ to see the U.S. Open and Wimbledon.

“I’m still frustrated that I can’t see all the matches that I want to,” Ball said.

For now, media and league executives are preaching patience. On a recent call with reporters, Rick Cordella, executive vice president of Peacock, said sports has splintered across multiple streaming apps just like other forms of entertainment, such as scripted series and movies. It will get easier for fans, he suggested, once these newer services reach mass audiences.

“There’s a litany of other content that’s spread across four or five of the biggest streamers, and sports really is no different,” he said. “We hope at some point that Peacock is as ubiquitous as the pay TV ecosystem and this is a moment in time.”

Garden, of Major League Baseball, predicts that the complaints will eventually die down once the entertainment industry starts bundling multiple streaming services together, making it easier for sports fans to find more games in a single place. It’s a vision of streaming’s future that is starting to sound remarkably like cable’s recent past.

“Disruption is hard,” Garden said. “I think the bundle is going to re-create itself, and the friction that consumers and fans are feeling is going to work itself out.”