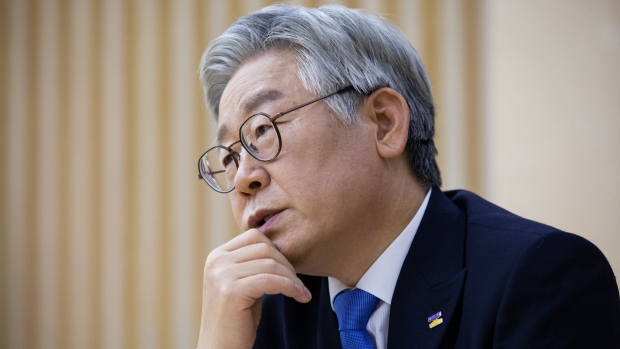 (Bloomberg) -- The governor of South Korea’s most populous province won the presidential primary for the ruling Democratic Party on a platform of universal basic income, sweeping reforms and widely expanding the social safety net.

Lee Jae-myung, who captured the nomination in a Sunday vote, will be the party’s choice in the election in March, seeking to keep the party in power after the single, five-year term of its current flag bearer, President Moon Jae-in, comes to an end.

Lee, the outspoken governor of Gyeonggi province that encircles Seoul, said after his victory that if elected president, he would launch real estate reforms to rein in runaway housing prices and tackle corruption, promising to make the country more equal.

But Lee has been clouded by a scandal involving one of his associates who made profits on a land deal, possibly using political connections to his advantage, Yonhap News Agency reported. The conservative opposition has sought to have an independent counsel investigate, while Lee has called any connection with him groundless.

Urban real estate prices will be a key issue in the race. Since Moon took office in May 2017, the average price of an apartment in Seoul has soared by about 90% and the jump in urban housing prices played a role in the drubbing his Democratic Party suffered in mayoral elections in the capital and in Busan this spring.

In an interview with Bloomberg last October, Lee warned that without across-the-board income support to address inequality, the stability of the country’s economy could be threatened.

Lee, a former factory worker who became a lawyer, is set for a tight race against the nominee from the conservative People Power Party, which will pick its candidate on Nov. 5. Its top candidates are Yoon Seok-youl, whose battles with Moon made him one of the country’s most popular figures, and Hong Joon-pyo. Hong has said the U.S. is “reckless” in its diplomacy with North Korea and questioned if U.S. nuclear weapons offered real protection.

A survey by four pollsters last week showed Lee topped the field to be the next president with 26% support among the public, followed by Yoon and Hong at 17% and 15%, respectively, Yonhap said.