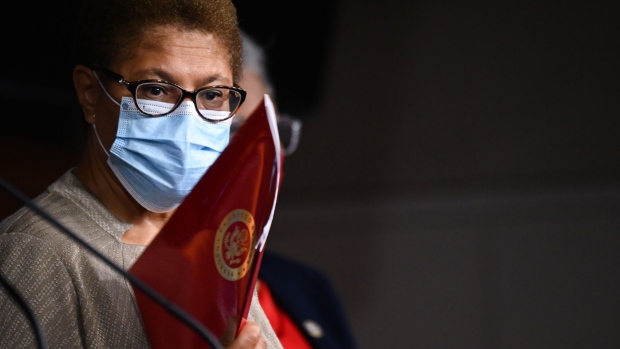 Representative Karen Bass, a Democrat from California and chair of the Democratic Black Caucus, wears a protective mask while listening during a news conference on Capitol Hill in Washington, D.C., U.S., on Wednesday, July 1, 2020. Efforts by Congress to limit the types of military equipment the Defense Department can transfer to law enforcement departments is unlikely to touch an even bigger source of advanced weapons accessible to civilian police. , Bloomberg

(Bloomberg) -- Representative Karen Bass, who’s among the potential running mates being considered by Democratic nominee Joe Biden, said Sunday that she’s not a “Castro sympathizer” after coming under attack from Republicans for her past support for Cuba.

Asked on NBC News’s “Meet the Press” whether she’d been naive about the communist regime in her youth, Bass replied: “Oh, I think as any 19 year-old would be, sure.”

Florida Senator Marco Rubio and Florida Lieutenant Governor Jeanette Nunez a day earlier accused Bass of being a sympathizer of the Castro regime after she visited Cuba in her youth and decades later as a lawmaker with former Secretary of State John Kerry in 2015 and President Barack Obama in 2016.

The Atlantic reported Friday that in 1973, when she was 19, Bass traveled to Cuba to volunteer as a construction worker in the Venceremos Brigade, a group that organized annual trips to the island for young American leftists. She returned to Cuba on her own at least 16 times after that.

On Sunday, Bass, 66, said she’s always believed in the need to bridge the divide between the U.S. and Cuba. She said she visited the island in her early 20s to help build houses, and for the past two decades has worked on health care-related issues there.

“Now, that doesn’t excuse the fact that I know the Castro regime has been a brutal regime to its people,” Bass continued. “I know that there is not freedom of press, freedom of association.”

Bass also said she doesn’t consider herself to be a “Castro sympathizer,” a reference to the late dictator, Fidel Castro, who governed Cuba for 49 years.

She added that her position was no different than that of the Obama administration, which sought to bring about a rapprochement with Cuba -- a policy that’s since been reversed by President Donald Trump.

“The Republicans have decided to brand the entire Democratic Party as socialists and communists,” Bass said. “So I’m not surprised by Rubio’s characterization of me or of a role I would play if I were on the ticket.”

Florida is a key swing state with a large Hispanic population, including many older Cuban immigrants who are hostile to U.S. outreach to Cuba.

Biden is expected to decide on his running mate in the second week of August. Polls show the former vice president with a lead over Trump in Florida.