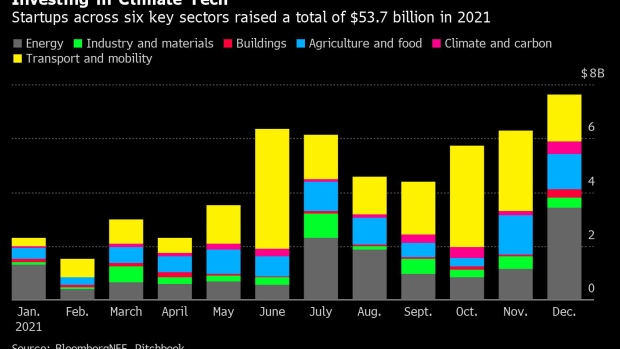 A Solarpro employee holds a LG Electronics Inc. NeON R 370W solar panel ahead of installation on the rooftop of a residential property in Sydney, Australia, on Monday, May 17, 2021. Australia is the global leader in generating electricity from the sun. Some 27% of buildings had a solar system on their roof at the end of 2020, the highest proportion in the world, according to figures from BNEF. Photographer: Brendon Thorne/Bloomberg , Bloomberg

Clean energy stocks have been getting absolutely clobbered.

Two indexes that track the sector—WinderHill Clean Energy and S&P Global Clean Energy—have dropped 13.9% and 8.2%, respectively, since the start of the year. From their market peaks of early last year, the WinderHill index has plummeted 54% and the S&P index has declined 39%. (For context, the Nasdaq Composite Index has fallen 9.6% from its high in November.)

The industry has been slammed by a combination of concerns about higher U.S. interest rates, a probable reduction in solar-system subsidies for California homeowners, the broader stock market rotation out of high-growth technology companies and the obstruction of President Joe Biden’s stalled “Build Back Better” agenda by 50 Republicans and two Democrats, Joe Manchin and Kyrsten Sinema. The problems seem to be outweighing any industry boost likely to come from implementation of Biden’s massive infrastructure program, which became law last year.

The result: Clean energy-focused exchange-traded funds have posted huge outflows. About $417 million was pulled from Invesco Ltd.’s $2.4 billion Solar ETF in December, the worst month in the fund’s nearly 14-year history. The $5 billion iShares Global Clean Energy ETF has suffered about $195 million of outflows in the past month, according to data compiled by Bloomberg.

But as evidence of a possible prolonged bear market mounts in this sector, analysts at firms including Morgan Stanley, BNP Paribas Exane and BMO Capital Markets are nevertheless seeing buying opportunities.

Morgan Stanley analysts raised their view of North America’s clean-tech industry to “attractive” from “in-line,” saying “we see strong growth and valuations that broadly screen attractive regardless” of whether the U.S. Congress passes the “Build Back Better legislation.”

“We favor stocks with strong barriers to entry and little growth priced in,” the analysts wrote in a report issued last week. Those companies include AES Corp., Plug Power Inc., Sunrun Inc. and TPI Composites Inc.

After significant underperformance in 2021, “we believe now is an excellent time to selectively buy stocks in the sector,” according to Morgan Stanley’s report issued last week. “We see continued strong growth for wind, solar, energy storage, fuel cells, and electrification technologies.”

Analysts at BNP Paribas Exane wrote last week that they recommend “playing the renewable theme through the integrated companies, which are better hedged, diversified and more balanced.” The firm upgraded its rating on EDP Renovaveis SA to “outperform” and spotlighted other European companies like Scatec ASA among “renewable pure plays.” The analysts said investors should avoid smaller renewable companies such as Neoen SA and Solaria Energia y Medio Ambiente SA.

“While it is difficult to know if we are close to the floor,” the industry’s potential for growth “remains robust, renewables are still cost competitive, and demand is as strong as we’ve ever seen it,” said analysts at BMO Capital Markets, who focus on Canadian renewable-power stocks.

The analysts maintained their positive view of Boralex Inc. and Innergex Renewable Energy Inc., and upgraded their ratings of Brookfield Renewable Partners LP and Northland Power Inc. to “outperform” from “market perform.”

Indeed, stakeholders with some of the longest of long-term outlooks showed record-level bullishness in 2021, with venture capital investors devoting almost $54 billion to startup companies in the clean-tech industry, according to BloombergNEF.

Last year saw “the rise of mainstream investors taking stakes in climate tech,” led by firms such as BlackRock Inc., Mubadala Capital, Sequoia Capital and Macquarie Capital, BNEF said. And there also was the creation of a series of climate-focused funds backed by General Atlantic, Brookfield Asset Management and TPG Inc.

The hottest areas for new investment were low-carbon transportation startups—almost all electric vehicle companies or related businesses such as EV charging—as well as renewable energy and food and agriculture technologies.