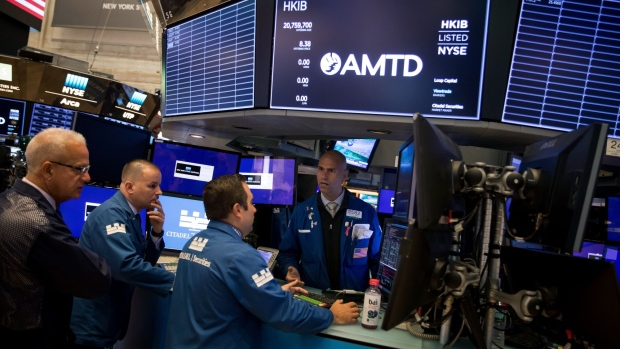 Traders work beneath a monitor displaying AMTD International Inc. signage during the company's initial public offering (IPO) on the floor of the New York Stock Exchange (NYSE) in New York, U.S., on Monday, Aug. 5, 2019. Financial markets buckled after China escalated the trade war with the U.S., sending American stocks careening toward the biggest drop of the year and sparking a rally in global bonds. , Bloomberg

It’s an old theory, with shaky proof, that always gets louder right around now. The stock market is so overrun with dumb index money and exchange-traded funds that it can’t even tell when something bad’s happening.

You hear it from old hands and stock pickers, lamenting a lost edge in a world where even a pandemic barely registers on charts. Something sinister must be afoot when 30,000 people are infected with coronavirus, the global economic expansion is threatened, and the S&P 500 has its best week in eight months.

Heed it all at your own risk. Such tales are spun anytime the market shakes off bad news (and even when it doesn’t.) Whatever happens in markets, someone will say it’s bad, and someone will blame ETFs. There are, of course, any number of reasonable explanations for the market’s buoyancy that have nothing to do with zombification -- Federal Reserve policy, the resurgent manufacturing sector, solid earnings.

That said, it’s easy to see why index products so often turn up as culprits in these types of market narratives: their relentless march really does provoke terror in one set of investors, mutual-fund stock pickers. Already in 2020, that group has fallen behind its passive brethren by a distance that will be hard to make up.

“A lot of times when you see criticisms of the growth in passive investing, it’s coming from an active manager,” said David Perlman, head of ETF research at UBS Wealth Management. “To the extent that we continue to see active funds struggle performance-wise, I think that shift to passive will continue.”

For anyone whose fund makeup strays too far from the S&P 500, it’s been a brutal month. With only 37 per cent of managers beating benchmarks in January, the group just suffered one of the worst starts to any year going back two decades, Bank of America Corp. data show.

Index funds remain the undisputed heavyweight champions of stocks in 2020, the best place to be amid a rally that has defied everything from virus panic to Middle East tumult. Through all the concerns, the S&P 500 never fell much more than 3 per cent, and now sits just below a record.

The question of whether ETFs zombify the market, or in academic terms “contribute to the comovement of assets,” is a heavily researched topic in financial economics, with very little consensus on an answer. An August 2018 study by Federal Reserve staffers listed the verdict as “unclear” and evidence “mixed” as to whether inclusion in indexes was likely to raise a stock’s beta, a measure of systemic risk.

Realize, when comovement is studied, it’s usually not to see if the market has gotten less prone to shocks, but more. Indeed, any willingness passive investors have to sit tight during volatile periods is billed by the index industry as a good thing, evidence of maturity. Fund shops fell over themselves following the equity sell-off in late 2018 describing their clients’ steadfastness.

Either way, macroeconomic concerns have strengthened correlations between S&P 500 stocks at the fastest pace since the 2018 rout nearly ended the bull market. That companies are moving together in the middle of an earnings season, a time when stock pickers theoretically gain an edge, is even more disconcerting for those that have lagged behind.

“The trend is clearly moving toward passive, unless active management begins to show signs of picking up,” said Mark Heppenstall, chief investment officer at Penn Mutual Asset Management, which oversees US$28 billion. “This isn’t going to help matters.”

Active managers aren’t doing themselves any favors with their picks. Perhaps sensing a turn was due, they came into the year with relatively light exposure to the high-flying technology firms that have ruled the bull market.

That was a poor decision. Five companies alone have accounted for 55 per cent of the S&P 500’s returns year-to-date -- Microsoft Corp., Apple Inc., Amazon.com Inc., Alphabet Inc., and Intel Corp. That’s come at the expense of stock pickers who had been waiting for their demise, with all except Google parent Alphabet making a list of mutual fund’s most unloved companies.

Doubling the pain is that while active managers’ most hated stocks have outperformed, their highest conviction calls have lagged. A Goldman Sachs basket of mutual fund’s most overweight positions has trailed the S&P 500 in five of the last six months, and a ratio of relative price appreciation versus their underweight peers fell to the lowest level since 2017.

“There is a lot of scrambling to get into the names that have been leadership names, which many active investors had shunned,” said Liz Ann Sonders, chief investment strategist at Charles Schwab. “Professional managers are constantly under performance pressure on a monthly basis, on a quarterly basis. When you have such a straight shot up when momentum is as powerful as this, absolutely it raises the pressure.”

So what, then, are active managers to do when they’re already behind for the year? Chris Harvey, the head of equity strategy at Wells Fargo Securities, says go big or go home. By his measures, active managers remain positioned for the likes of Microsoft, Intel and Apple to underperform, and their track record picking stocks within the technology sector has been fickle despite the hours spent researching.

“The question for these PMs is: Are you confident the M.I.A. stocks will underperform in 2020? If so, then now is the time to materially increase these under-weightings,” Harvey wrote to clients this week. “If not, we advise benchmark weighting the names, forgetting what happened in 2019, and focusing attention elsewhere.”