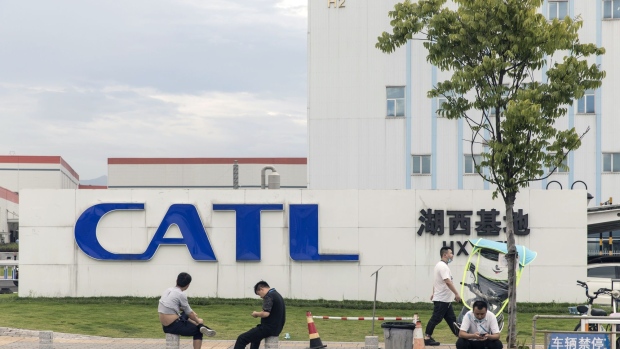 Employees sit in front of the Contemporary Amperex Technology Co. (CATL) Huxi production facility in Ningde, Fujian province, China, on Wednesday, June 3, 2020. CATL's battery products are in the vehicles of almost every major global auto brand, and starting this month they'll also power electric cars manufactured by Tesla at its factory on the outskirts of Shanghai. Photographer: Qilai Shen/Bloomberg , Bloomberg

(Bloomberg) -- Contemporary Amperex Technology Co. Ltd., the world’s biggest maker of batteries for electric cars, has kicked off an A-share private placement that could raise about 45 billion yuan ($6.7 billion), according to terms of the deal seen by Bloomberg News.

The Ningde, Fujian-based company has set a floor price of 339.67 yuan for the placement, the terms show. It plans to price the share sale on Wednesday, according to people familiar with the matter, who asked not to be identified as the information is private.

The placement includes a greenshoe option that could take the deal size to about $6.87 billion, IFR reported earlier on Monday, citing unidentified people. A representative for the company, better known as CATL, didn’t immediately reply to requests for comment.

CATL flagged the placement earlier, saying in a filing to the Shenzhen stock exchange in November that it was cutting its size to 45 billion yuan from 58.2 billion yuan. Proceeds will be used for the production and upgrade of lithium-ion battery manufacturing in four Chinese cities, as well as research and development.

Shares in CATL fell 2.2% to 443.82 yuan at the midday close in Shenzhen, bringing losses for the year to almost 25%. The company has a market value of about $154 billion.

The battery making giant has been under pressure in recent months after posting its sharpest-ever drop in quarterly earnings for the first quarter and disclosing a sizable derivatives liability.

The company also weathered market rumors last week, including that a large futures loss may have dented its second-quarter earnings and that vice chairman Huang Shilin cut his stake recently for cash.

CATL denied such speculation on both counts, noting Huang’s interest remained unchanged after he transfered about 2 million shares to six private funds that he owned.