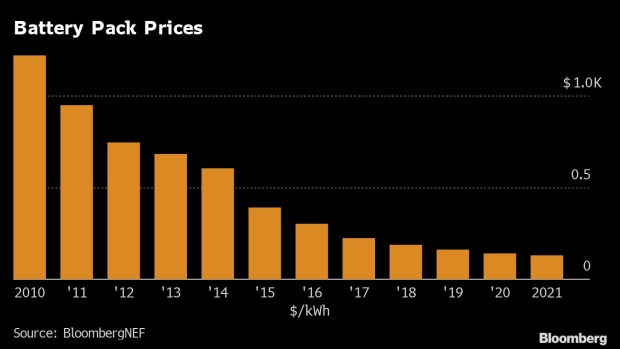 Hello Hyperdrivers, James Frith here. I wanted to follow up on a topic I first raised in September — battery costs. BloombergNEF has just published the 2021 battery price survey, one of the most important pieces of research we carry out annually.

Why are this year’s prices higher than expected? The cost of raw materials used in the cathode — lithium, cobalt and nickel — and other key components including the electrolyte have risen this year, putting more pressure on the industry. The increases have been more prominent in the second half of 2021, and even led to Chinese battery manufacturer BYD announcing a 20% battery price increase in November.

The results aren’t as bad as I had feared when I previewed the early findings in September. There are four reasons behind this. First, prices for raw materials and components were relatively low in the first half of the year. This meant that for the first six months of 2021, battery prices were lower than they were in 2020, helping the yearly average to fall.

Third, when using nickel-based cells, automakers have more widely adopted cathode chemistries that reduce the amount of expensive cobalt used, such as NMC (811). This resulted in lower average NMC prices in the first half of the year, helping to reduce some of the impacts of higher raw material costs in the second half.

Finally, when automakers place large battery orders, they increasingly use contracts that link raw material costs to a commodity index. These prices are normally reviewed on a quarterly basis, and use a price averaged over three months trailing the quarter by a month. This means that prices in the fourth quarter of this year would use an average price from June, July and August. Many automakers won’t feel the hit from the huge lithium price rise seen in September and October until the first quarter of 2022.

We expect prices next year will be $3/kWh higher than 2021 prices on a nominal basis. This would mark the first price increase that the battery industry has seen since we began tracking these prices in 2012. Inflation also will affect the outcome for 2022. Once adjusted for real 2022 dollars, we could still see prices fall.

When I start talking about battery prices, I inevitably get a bunch of folks saying that these prices are unobtainable and unrealistic. However, this really depends on the sector you are working in and how big your order volumes are. Automakers with annual orders in the tens of gigawatt-hours are able to negotiate more competitive pricing. In 2021, battery-pack pricing reported to BNEF ranged from $85/kWh to $546/kWh. Low-volume, niche applications came in at the top of the range.

2021 has been a wake-up call for the battery industry, with the realization that we are at a point now where prices may not necessarily fall every year. In the long run, I’m still confident prices in 2030 will be close to half of what they are today, but it may not be smooth sailing to get there. For the moment we need to concentrate on getting the industry through the next 18 months, to ensure the continued electrification of transport and other sectors.