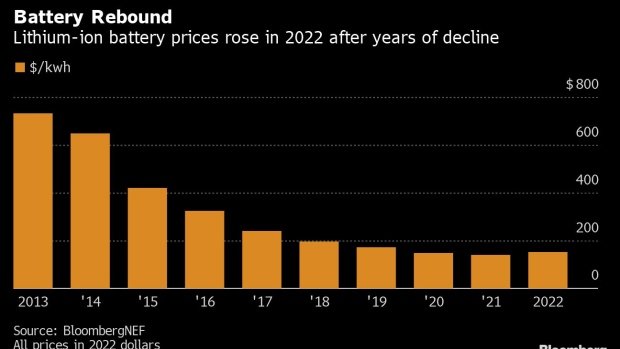 (Bloomberg) -- Prices for the batteries that power everything from smartphones to cars rose in 2022 for the first time since research firm BloombergNEF started tracking them — and they won’t likely drop next year.

The global average price for lithium-ion battery packs climbed 7% to $151 per kilowatt-hour, according to BNEF’s annual battery price survey. Never before in the 12 years BNEF has surveyed battery prices have they recorded an annual increase, instead dropping sharply as production grew. But this year’s rising costs for lithium, nickel and the other metals batteries contain have halted that decline and will keep prices around $152/kWh in 2023, BNEF predicts. Not until 2024, when more lithium production is expected to come online, are prices forecast to drop again.

The $151 figure represents an average price across several industries that use lithium-ion battery packs, including large-scale units being plugged into the electricity grid to prevent blackouts. For electric vehicles, the average pack price was $138/kWh.

The higher prices strike at a delicate moment. Automakers worldwide are rolling out new electric car and truck models aimed at the mass market, not just early adopters, and high battery prices are one of main reasons EVs cost more up-front than comparable gas-burning cars. That EV premium is expected to disappear once battery prices drop below $100/kWh, a milestone BNEF previously forecast would arrive in 2024. Now the research firm forecasts reaching that tipping point in 2026.