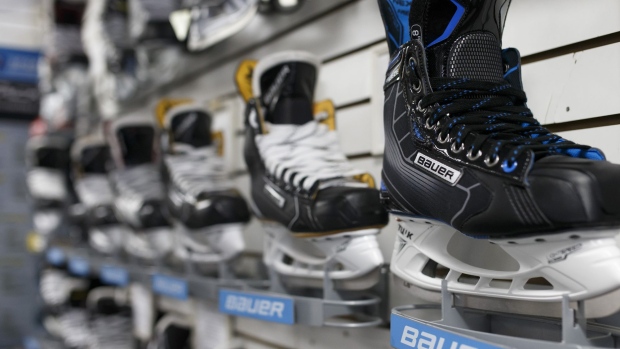 Bauer hockey skates are displayed for sale at an equipment store in Toronto, Ontario, Canada, on Monday, Oct. 31, 2016. Performance Sports Group Ltd., the owner of the Bauer and Easton brands, filed for bankruptcy protection as part of a deal to sell the hockey- and baseball-equipment business for at least $575 million. Photographer: Cole Burston/Bloomberg , Bloomberg

Hockey Canada is facing an audit by the Canadian government and waning corporate sponsorship as it tumbles further into controversy over its handling of the case. Bauer notified Hockey Canada on Friday that it’s halting its funding for the world juniors -- an annual tournament that’s widely followed in Canada.

“The initial allegations and response, as well as new information that continues to come to light, are extremely disturbing and raise questions about our partnership moving forward,” Mary-Kay Messier, Bauer’s company’s vice-president of global marketing, said in an email statement.

A woman filed a lawsuit alleging that eight hockey players assaulted her after a Hockey Canada Foundation event in 2018, according to court documents filed in April. The federal government is investigating the organization’s decision to settle the case out of court to determine whether taxpayer money was used to cover its costs.

Numerous sponsors have pulled financial support for Hockey Canada in the past month, including Bank of Nova Scotia, Tim Hortons, Telus Corp. and Imperial Oil Ltd.’s Esso gas station chain. The government has suspended its funding for the organization.

Business development and partnerships account for 43% of Hockey Canada’s funding, according to its 2021 annual report. Government funding makes up 6%.

Police in London, Ontario, have reopened an investigation into the 2018 incident; the initial investigation did not lead to criminal charges. The police division in Halifax, Nova Scotia, is now investigating an alleged assault at the world junior hockey championships in 2003.

This week, Hockey Canada said it will no longer use a multimillion-dollar legal reserve fund to settle sexual assault claims.