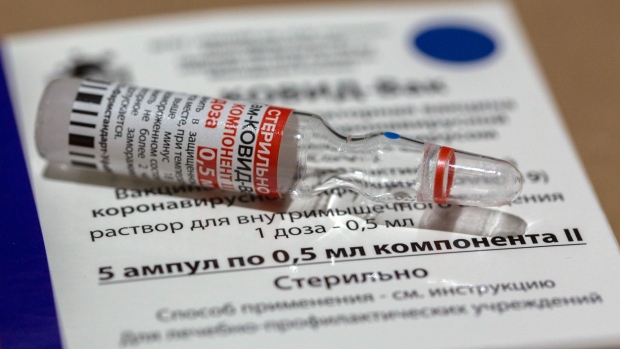 A vial of the Sputnik V Covid-19 vaccine at a cold storage facility in Karachi, Pakistan, on Friday, March 19, 2021. Islamabad has granted permission to Russia’s Sputnik V, which has been validated by global experts as being more than 90% effective. Photographer: Asim Hafeez/Bloomberg , Bloomberg

(Bloomberg) -- Bavaria signed a preliminary agreement to secure as many as 2.5 million doses of Russia’s Sputnik V Covid-19 vaccine, some of which would be produced at a facility in the German state.

The deal with the state-run Russian Direct Investment Fund, which backed Sputnik V’s development and is in charge of its international roll-out, is contingent on the shot gaining European Union or German approval, Bavaria’s health ministry said in an emailed statement.

As well as an option to import Sputnik shots directly from Russia, production would be ramped up at a facility belonging to Russian drugmaker R-Pharm in the town of Illertissen, west of the state capital Munich, the ministry said.

Germany signed up to a program under which the EU takes the lead on sourcing most of the coronavirus vaccines bought by the bloc, but has said it would consider buying Sputnik V even if some of its European partners choose not to. Bavaria is the first of the 16 regions to announce an actual agreement.

The doses would probably be delivered in July, Bavaria Premier Markus Soeder said Wednesday at a news conference. Soeder, who is a leading candidate to replace Angela Merkel as German chancellor after September’s election, is keen to show voters that he’s doing all he can to speed up the country’s sluggish inoculation drive.

Russia has persuaded more than 50 countries to approve Sputnik V, with several million doses already delivered to Latin America, the biggest demand so far. The European Medicines Agency has started a rolling review of Sputnik -- designed to speed up the assessment of a promising medicine during a public health emergency.

EU leaders were told during a recent video conference that it could take three to four months before Sputnik receives EMA approval, according to a diplomatic cable seen by Bloomberg. Some leaders questioned whether the drug would still be needed at that point, the note said.