Shares of Canadian banks have rallied since the lenders completed their last earnings season, and it certainly hasn’t been expectations of robust earnings growth in their upcoming quarterly releases that has driven the rally.

Indeed, earnings are expected to decline from year-ago levels by between five and eight per cent in the fiscal first quarter (which ended on January 31).  Instead, investors are looking beyond the pandemic and weighing several potential catalysts that could drive share prices higher in a post-coronavirus world.

Some of those hoped-for catalysts are well known by now. The huge amounts of money that banks have set aside for potentially bad loans are expected to decline from here. In fact, releases from loan loss reserves are expected to boost profit later this year. And with banks’ capital levels surging, expectations are high for potentially outsized dividend hikes and share buybacks later this fiscal year (or whenever the Office of the Superintendent of Financial Institutions allows for it).

BNN BLOOMBERG POLL:
Which of these do you want to see banks prioritize with their high capital levels?

Stay tuned, because market expectations on each of those things may be substantially changed by the bank results coming Feb. 23, 24 and 25.

But now another catalyst is on investors’ minds. With COVID-19 vaccines rolling out in Canada and the U.S., some analysts believe a strong economic rebound from the pandemic-clobbered North American economy may be looming. If they are correct, the banks may soon be operating in a far more robust economic environment than the market has assumed.

So when banks CEOs speak on conference calls, there will be keen interest in their views on the prospects for a North American economic recovery.

Meny Grauman, an analyst who covers the banks for Scotia Capital, said in a recent report that investors have become convinced that North American economic growth “is poised to bounce back with the force of a loaded spring.”

Rob Wessel is a former Bay Street bank analyst and now managing director of Hamilton ETFs. He said a scenario featuring several quarters of outsized growth in gross domestic product – driven by a surge in pent-up demand from consumers finally able to get out of their homes and spend their money - is one of three factors capable of spurring a rally in the bank stocks.

“Should this cause long rates to rise, and/or the yield curve to steepen, this would also be positive for sentiment [toward the banks],” Wessel concluded in a recent video on the Hamilton ETFs website. Higher long-term interest rates would be good for the banks’ net interest margins, or the spread between lending and deposit rates.

Those management conference calls this week will also be examined closely for clues on what banks will do with the heavy amounts of excess capital they’re carrying. That financial firepower is largely the result of a ban on dividend hikes and share buybacks imposed by Canada’s banking regulator at the beginning of the pandemic. But the ban won’t last forever. It is widely assumed to be lifted late in 2021. Any clue that banks are leaning toward larger-than-usual dividend hikes or share buybacks when given a free hand will likely be positive for share prices.

Grauman believes investors are too conservative on the timing of dividend hikes, telling clients recently “we believe this path is a lot nearer than the market currently believes.”

And releases from loan-loss reserves will also be a positive. No one expects to see them this time around. But it’s already started to happen at U.S. bank; and, here in Canada, sharply reduced provisions for credit losses this quarter would be a strong signal of releases likely coming in the next quarter or two.

Wessel believes as much as $7 billion of the $30 billion in loan-loss provisions set aside by the banks since the onset of the pandemic could be released back into earnings. If so, he said those releases would support the expansion of earnings multiples awarded to the bank shares. With bank stocks now trading at about 10.5 times expected earnings, there is room for multiple expansion, he noted.

Here are when the banks are due report their fiscal first-quarter earnings. Each bank will report in the morning, before the open of trading. 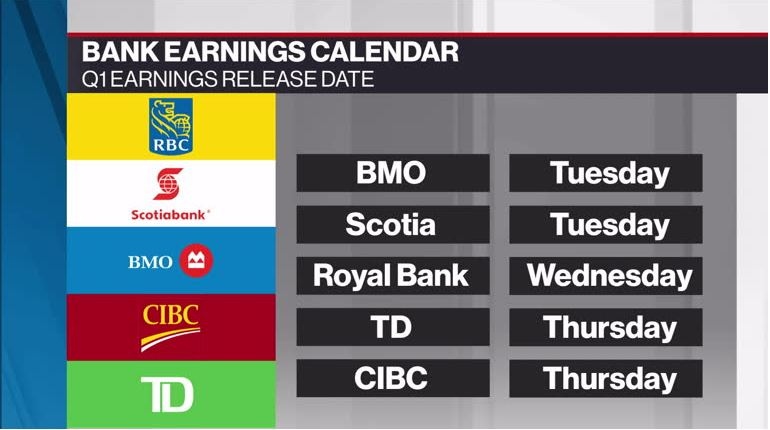