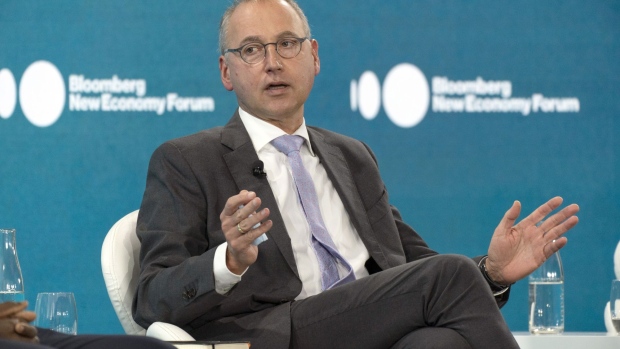 (Bloomberg) -- Bayer AG’s chief executive officer said the conglomerate will continue to run its three main business units under one roof, even as investor interest in the potential for splits among large diversified companies has intensified.

“We are going to continue the course, which is developing our company along the three pillars that we have -- pharmaceuticals, crop science and consumer health,” Werner Baumann said in a television interview at the Bloomberg New Economy Forum in Singapore. The decision was made by the German company’s board of management and endorsed by the supervisory board, he said after being asked about a possible breakup.

Baumann’s comments come after Johnson & Johnson last week announced it would split its pharmaceutical and consumer health care units into two separately traded companies -- a strategy other pharmaceutical companies have recently pursued to focus on their most profitable drug development efforts. General Electric Co. announced it would break into three pieces days earlier.

All three companies have perennially been asked about the potential for a breakup, though no announcements have come until this this month. The recent decisions by J&J and GE have increased market interest in similar splits among other conglomerates, especially in the health-care space.

“What’s right for one company is not necessarily the right thing for the other company,” Baumann said, adding that Bayer sees significant advantages to running the businesses under one roof. “The area we are focused on is life sciences. If you look at our portfolio today, we are active in three businesses. It’s pharmaceuticals, it’s crop science, and it’s consumer health business. All of them are informed by life sciences as a platform.”