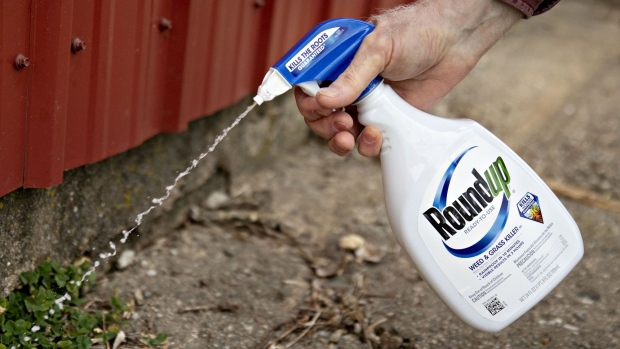 Weeds are sprayed with a bottle of Bayer AG Roundup brand weedkiller in this arranged photograph outside a home in Princeton, Illinois, U.S., on Thursday, March 28, 2019. Bayer vowed to keep defending its weedkiller Roundup after losing a second trial over claims it causes cancer, indicating that the embattled company isn't yet ready to consider spending billions of dollars to settle thousands of similar lawsuits. Photographer: Daniel Acker/Bloomberg , Bloomberg

(Bloomberg) -- Bayer AG lost its second appeal of the three jury verdicts finding that the company’s Roundup weed killer causes cancer.The U.S. Court of Appeals in San Francisco refused on Friday to overturn the 2019 decision in the only case to go to trial in federal court. The decision may embolden consumers to bring more claims beyond the many thousands the company is trying to resolve in an $11 billion settlement.

Bayer was testing an argument that it hoped would undercut thousands of outstanding cases.

It contended the U.S. Environmental Protection Agency’s authority to regulate herbicide labeling prohibits states from imposing demands that depart from federal requirements. The company said the verdict was improperly based on a California law requiring Bayer to warn consumers of Roundup’s cancer risk. The EPA supported Bayer’s appeal.“This appeal has the potential to shape how every subsequent Roundup case is litigated,” Bayer said in a court filing.The plaintiff in the case, Edwin Hardeman, testified that he used Roundup for years on his large plot of land in Sonoma County, about 60 miles (100 kilometers) north of San Francisco. Similar to other plaintiffs in the U.S., Hardeman said his exposure caused his non-Hodgkin’s lymphoma. Jurors awarded him more than $80 million, later cut by the trial judge to $25 million.

The three-judge appeals court affirmed the $25 million award.Hardeman’s suit was the second of three Roundup trials Bayer lost in 2018 and 2019 with average awards of almost $50 million per plaintiff that sent its stock into a downward spiral. The other two cases were tried in California state court. The company lost its appeal of the first verdict -- though it did win a reduction in damages -- and is appealing the third verdict.

The legal threat has weighed on Bayer since its 2018 acquisition of Monsanto, maker of the herbicide. Despite an $11 billion proposal to resolve the U.S. suits announced in June, the Roundup litigation has proved more expensive and difficult to contain than Bayer calculated. In November, the judge who handled Hardeman’s trial and has been overseeing about 4,000 federal cases resumed readying cases for trial after a pause to allow for lagging settlement negotiations.

(Updates with background on case)