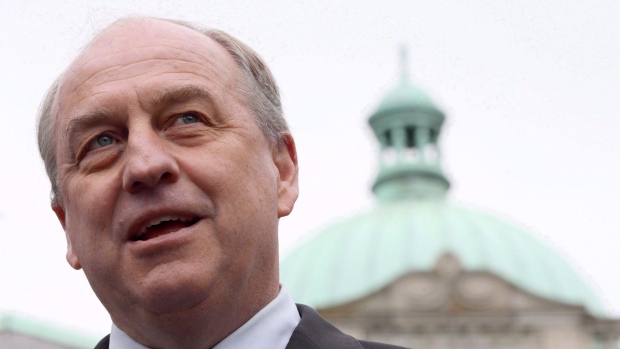 VICTORIA -- A deal has been reached that paves the way for the NDP to topple the Liberal government in British Columbia with support from the Green party.

NDP Leader John Horgan and Andrew Weaver of the Greens announced the agreement today that they say would allow for a stable minority government for the next four years.

Weaver said the Green caucus has voted in favour of the agreement and the NDP is scheduled to hold a vote on Tuesday.

Details of the agreement won't be released until the deal is approved by the New Democrat caucus.

The Liberal party fell one seat short of winning a majority government in the May 9 election.

Premier Christy Clark issued a statement last week saying that with a plurality of seats in the legislature, the Liberal party had "a responsibility to move forward and form a government."

The election did not produce a clear winner in the 87-seat legislature, with the Liberals taking 43 seats, the NDP 41 and the Greens three.

For the first time in Canadian history, the results of the election left the Green party holding the balance of power.

As the incumbent premier with the most seats, Clark would normally be given the first chance to form a government by the lieutenant-governor and it isn't known whether the Liberals might still try to get the support of the legislature on its own agenda.

Weaver said his office informed Clark of the outcome of its negotiations after trying to reach an agreement with both the Liberals and NDP.

Negotiations between the Green and Liberals parties were being held as late as Sunday night, Weaver said.

Under terms of the agreement, the Greens will support the NDP's legislative program but there are no plans for anyone in Weaver's caucus to serve in a cabinet position.