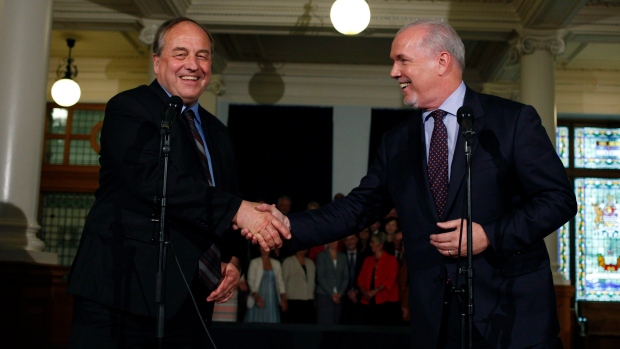 B.C. NDP leader John Horgan and B.C. Green party leader Andrew Weaver shake hands after signing an agreement on creating a stable minority government during a press conference in the Hall of Honour at Legislature in Victoria, B.C., on Tuesday, May 30, 2017 , The Canadian Press/Chad Hipolito

VICTORIA, British Columbia - The two parties set to take power in Canada's Pacific province of British Columbia vowed on Tuesday to block Kinder Morgan Inc's plans to expand an oil pipeline, setting up a fight with energy-rich Alberta and the federal government.

The Greens and left-leaning New Democrats, or NDP, who have sealed a deal to unseat Liberal Premier Christy Clark following an inconclusive election, oppose plans to almost triple the capacity of the Trans Mountain line's capacity.

The parties said they would use "every tool available" to stop the expansion of a pipeline designed to carry crude from Alberta's oil sands to the west coast.

Prolonged battles over Trans Mountain and other crude pipelines are raising questions over the viability of new energy projects in British Columbia. Clark conceded on Tuesday she was facing defeat, giving the New Democrats and Greens, who hold 44 of the 87 legislative seats, a chance to govern.

While there is some dispute over whether British Columbia has a formal veto right, it can raise hurdles that could effectively make the pipeline impossible to build.

"The more complicated this gets, then market forces take over, and this becomes a financial calculation (for Kinder Morgan investors) - whether the project goes ahead," she said.

The project would increase Pacific exports of Canada's landlocked crude, a move that would help the country's large oil industry. It has met opposition from environmentalists and aboriginal groups in British Colombia who are worried about oil spills from the increase in tanker traffic it would cause.

Canadian Prime Minister Justin Trudeau, whose Liberal government approved Trans Mountain last November, stood by the project on Tuesday. His party is not affiliated with the British Columbia Liberals.

The Canadian Constitution allows Trudeau in theory to declare the project to be for "the general advantage of Canada," which would let Ottawa take control. That could trigger political outrage among provincial governments, which have wide-ranging powers.

"Mark my words, that pipeline will be built. The decision has been made," Alberta New Democratic Premier Rachel Notley told reporters, saying British Columbia's economy could not just rely on an overheated property market and needed the jobs the pipeline would create.

'UNICORNS IN ALL OUR BACKYARDS'

Weaver retorted that promises of natural resources projects creating plenty of jobs were as unlikely as "unicorns in all our backyards."

British Columbia NDP leader John Horgan, who would become premier under the agreement with the Greens, has expressed reservations about a $27 billion liquefied natural gas terminal that Malaysia's Petronas wants to build in northern British Columbia. Petronas declined to comment.

Tuesday's power-sharing agreement did not make specific reference to the province's LNG industry or to the Petronas project.

Shares in Kinder Morgan Canada Ltd fell as much as 7.4 percent on their debut in heavy trading on Tuesday before recovering ground to close down 4.4 percent at C$16.24.

Kinder Morgan spun off the unit to help finance the expansion of the pipeline. The firm raised $1.75 billion in the initial public offering at $17 per share last week.

Shares in parent company Kinder Morgan ended down 4.3 per cent. The firm said on Tuesday that expansion remained on track to start service at the end of 2019.

"It sounds like this is going to set off a battle between B.C. and the Canadian government," said Morningstar analyst Sandy Fielden, adding it was unclear what Kinder Morgan could do at this point.

"The bottom line is we are back in the delay business."