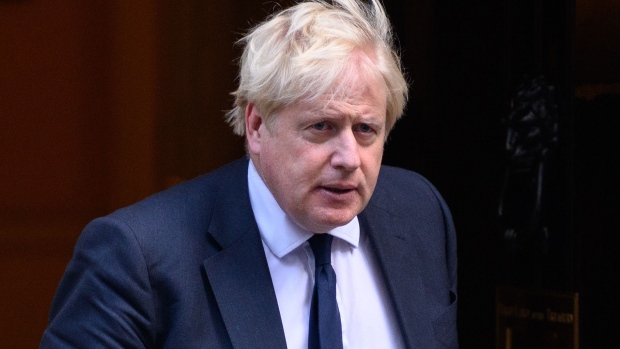 (Bloomberg) -- Filth spewing into a picturesque stretch of U.K. coastline is far from the image of post-Brexit Britain that Boris Johnson wants to portray.

Yet just as the prime minister prepares to welcome world leaders for talks on protecting the planet, scenes like those at Langstone Harbour, where untreated sewage was discharged last week, are dominating the headlines.

Mounting calls for action finally proved too much late Tuesday, as ministers announced a U-turn that will see water companies face a legal requirement to cut so-called storm overflows of sewage. The decision came just before the government was expected to face another defeat in the House of Lords.

The companies are a legacy of the privatization of Britain’s water industry under former Prime Minister Margaret Thatcher, which for some members of Johnson’s Conservative Party makes the system beyond reproach.

Still, critics say it’s led to three decades of under-investment, even as dividends were paid to investors, leaving infrastructure buckling under modern pressures. Britain’s water companies dumped raw sewage and waste into rivers and into the sea more than 1,000 times a day on average last year.

The issue was thrown into the national spotlight when more than 250 Tory MPs voted with the government to reject an attempt by the unelected Lords to toughen up planned environmental legislation.

As COP26 Nears, the Toughest Goals Are Still Out of Reach

Their decision led to a backlash on social media, with MPs’ Twitter feeds tagged with images of filthy water and waste-strewn beaches.

Though the timing ahead of the COP26 summit in Glasgow is awkward for Johnson, the argument goes far beyond his government’s green credentials, to the state of the country and -- according to opposition politicians -- the consequences of choices by his and past Conservative administrations.

Brexit also looms large, after authorities waived rules on sewage treatment due to a shortage of chemicals, as supply chains were squeezed by the U.K.’s split from its largest trading partner and the fallout from the pandemic. The divorce was promised as an opportunity to tighten environmental standards.

The problems currently faced by the U.K.’s privatized electricity industry, with many suppliers going bust due to rising wholesale prices, also hung over Tory opposition to over-burdening water companies with new regulations.

Johnson’s spokesman, Max Blain, hinted at the potential implications if the government gets too tough on the companies, telling reporters Tuesday that the cost of complying with new measures would be passed on to consumers.

The idea put forward in the House of Lords would cost an initial estimate of 150 billion pounds ($206 billion) to implement, Blain said. “That would mean that individuals -- every one of us as taxpayers -- paying potentially thousands of pounds each as a result.”

Under current rules, water firms are allowed to release sewage into rivers after extreme rainfall and storms, to protect houses from flooding.

But critics say it’s happening far more often than that. Even some prominent Tories argued the government’s original plan didn’t do enough to force companies into action, and 22 of them rebelled last week.

They included former ministers Esther McVey, David Davis, and Tracey Crouch. Oliver Heald said there should be a duty on companies “to actually do something, rather than just to report on what they have or have not achieved.”

Days before the climate talks start, the government decided it agrees.