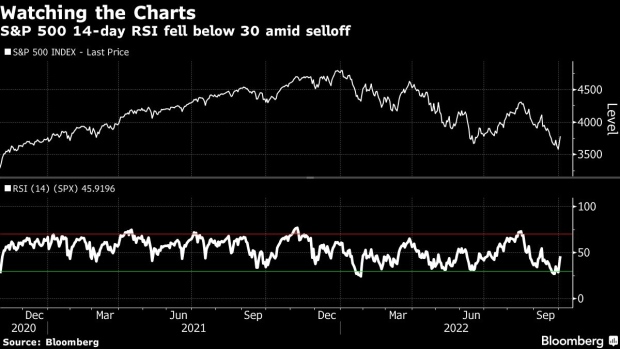 (Bloomberg) -- As ever, a fast market rebound has unleashed a deluge of views on whether the move will last. Chart analysts, cognizant that no rally has survived this year’s downdraft, are generally optimistic this one has room left to run.

Monday’s 2.6% surge in the S&P 500 was broad-based: 486 of its members gained. This is a metric Eric Johnston, head of equity derivatives and cross asset at Cantor Fitzgerald, likes to track because of its significance for future market performance.

“When the number of advancers is this broad-based, it signals an upward inflection point,” he wrote in a note to clients. “And when this happens, the forward returns are very strong.”

Strategists at Bespoke Investment Group pointed to the same measure, saying that bear markets tend to end with huge up days like Monday’s, with the average move typically being above 4%.

The S&P 500 extended its advance for a second day, climbing as much as 3% on Tuesday as investors wagered the end of monetary tightening could come sooner than previously forecast. That speculation grew after the Reserve Bank of Australia raised rates by half as much as had been expected.

“Investors are looking for any sign they can find that central banks will ease up on their tightening cycles,” Lauren Goodwin, economist and portfolio strategist at New York Life Investments, said by phone.

But might it just be that Monday’s rebound was a bounce-back from technically oversold conditions?

The surge at the start of the week came amid oversold levels for all three of the major indexes -- the S&P, the Dow Jones Industrial Average and the Nasdaq -- with each clocking relative strength readings in the mid-20s. That, and the fact that September had been so brutal, were the “most obvious” reasons stocks rallied, according to Art Hogan, chief market strategist at B. Riley.

“Whether or not we know if this is a bear-market rally or something more significant is only achievable in hindsight,” he said in an interview.

After the fact, “everyone can say, well that was the bottom and it was quite obvious and here are all the reasons,” he said. But the real tell will be less technical and more fundamental news -- like Monday’s US manufacturing reading. “If you start to see incremental inflation inputs rolling over, then there’s a chance that the Federal Reserve gets to their terminal rate sooner and it’s lower.”

Investors have dealt with plenty of fakeouts, with stocks rallying over the summer only to test lows of the year in September. With new lows set, few can say with real conviction whether this week’s bounce is the real deal.

Last Wednesday, for instance, saw the S&P 500 add 2% with 486 members gaining. The following day, stocks lost more than 2%. The question this week is “whether we’d see immediate upside follow through this time,” wrote Frank Cappelleri of CappThesis in a note. “With last Wednesday’s effort being completely wasted the very next day, the universal notion wasn’t laced with a high amount of confidence.”

Still, Monday’s rip higher has a different feel to it, he said. For one, many of the beaten-down names didn’t lead the advance, though many of the rally’s leaders have been leaders all year.

“While that’s a small sampling, it tells us that demand continues to be around for areas that have gotten hit recently but remain in long-term uptrends,” he wrote. “Rallies that last longer than a day or two need both sides to thoroughly swing momentum.”