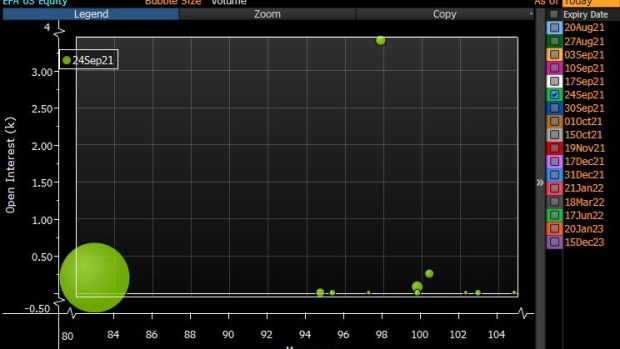 (Bloomberg) -- Some investors appear to be hedging against a slump in stocks outside the U.S. should the Federal Reserve announce plans to taper stimulus at its September meeting.

Some investors are speculating that in its Sept. 22 policy decision the Fed could unveil a road map to taper its $120 billion of monthly bond purchases. Tighter policy could lend support to the dollar and pose obstacles for assets like emerging-market equities.

The strike price on the EFA bets would imply a drop of about 18% from its close of $79.14 on Thursday. For the EEM, it would be an approximately 19% decline. Skew, or how expensive bearish bets are relative to bullish ones, is already elevated, Murphy said. EFA is up 8.5% year-to-date, while EEM is down 4.1% -- compared with an 18% gain for the SPDR S&P 500 ETF Trust, ticker SPY.

“This investor might not necessarily be looking for either EEM or EFA to trade below the put strikes,” Murphy said. “Instead they may be looking for a gap move lower for EEM and EFA and a spike in implied volatility on an official taper announcement. At that point they could look to take advantage of a move lower and spike in volatility and sell these puts for a multiple of what they were purchased for.”