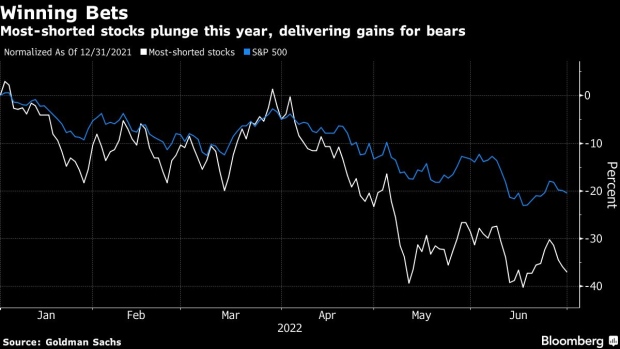 A trader on the floor of the New York Stock Exchange (NYSE) in New York, U.S., on Monday, June 27, 2022. Money managers betting on a sustained global rebound will be left sorely disappointed in the second half of this crushing year as a protracted bear market looms, even if inflation cools. , Bloomberg

(Bloomberg) -- To state the obvious, it has been a good time to be short the market. But the success of bearish traders in 2022 goes beyond luck.

With the S&P 500 down about 20% over the six months, baskets tuned to the favorite bets of those speculating on declines are showing bigger losses. An index of most-shorted stocks kept by Goldman Sachs Group Inc., for instance, is down 37%, suggesting the pessimists have done a particularly good job trawling for companies most exposed to the downdraft.

From Bed Bath & Beyond Inc. to Nikola Corp. and Beyond Meat Inc., profitless companies that once had no problem flying high are suddenly crashing down as the Federal Reserve embarks on the most aggressive monetary tightening in decades. Those three stocks are each down at least 50%, representing a boon to short sellers.

“A lot of high-flying stocks were bid up to silly levels,” said Michael Purves, founder of Tallbacken Capital Advisors. “They were the first to provide good shorting opportunities.”

Redemption has been a long time coming in a corner of Wall Street that has been suffocated by years of mind-numbing gains in equities. The $1 trillion long-short hedge fund industry, which suffered money withdrawals for six full years in a row, saw inflows in the first quarter, data compiled by HFR show.

Across the market, short sellers now sit on an unrealized gain of roughly $300 billion year-to-date, according to an estimate from S3 Partners, a data-analytics firm.

“While the market has trended downward and shorts were making money on the downside, they were actively shorting to the tune of around $144 billion in 2022,” said Ihor Dusaniwsky, head of predictive analytics at S3. “Consumer discretionary and technology are the most profitable sectors to short.”

Before this year bears had been almost driven to extinction during relentless equity gains. Now, with the Fed pledging to fight red-hot inflation and ceding its role as bulls’ ally, short sellers are getting their moment to shine.

The windfall from betting against stocks has bolstered performance for hedge funds that usually take both bullish and bearish positions on equities. Those tracked by HFR is about 5 percentage points ahead of the S&P 500 this year through May.

It’s a stunning reversal of fate from the previous 13 years, when hedge funds trailed the market every year.

It’s “vindication of sorts,” said Matthew Tuttle, chief executive officer at Tuttle Capital Management LLC. “Obviously in an environment with the Fed pumping liquidity into the market it is hard to make money on the short side.”

“These days it is a lot easier,” he added. “Unfortunately for the shorts, markets don’t go down forever so they need to enjoy it while it lasts.”