Republican congresswoman campaigns to legalize cannabis in the U.S.

Short sellers in cannabis stocks are feeling the squeeze as Tilray Brands Inc. and Sundial Growers Inc. soared more than 55 per cent each this week, and a House panel said it would vote next week for the second time to decriminalize marijuana.

Pot stocks, which have languished this year, also got a boost this week from deals in the sector and Senate passage of a bipartisan bill that would expand scientific and medical research on marijuana compounds. The global cannabis market’s growth hinges on legalization in the U.S. However, the glacial pace of federal legalization efforts in the U.S. has sowed doubts it will happen anytime soon.

Tilray and Sundial climbed to their highest levels since late last year on Friday, while U.S. shares of Canopy Growth Corp. and Aurora Cannabis Inc. both closed up 10 per cent. Short sellers in these four stocks are down more than US$360 million this week, according to S3 Partners data.

With bearish bets in these stocks mounting over the past month, “this short selling will not only wane as mark-to-market losses mount but shorts will be squeezed into reducing their short exposure,” said Ihor Dusaniwsky, a managing director at S3 who covers predictive analytics.

Two microcaps in the sector, HEXO Corp. and cbdMD Inc., could also feel the pinch, Dusaniwsky said in an interview. 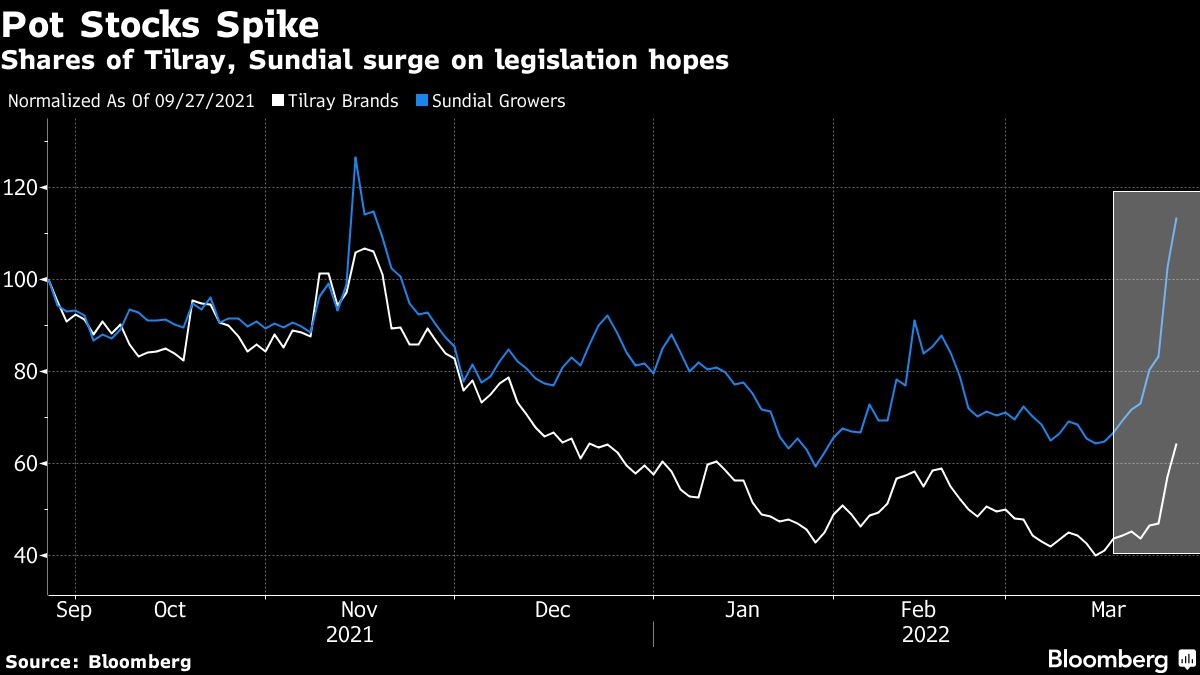 Still, shorts may not be ready to close their bets just yet as analysts seemed less enthused by the developments, saying any decriminalization would run into obstacles in the Senate.

“Cannabis legislation is not about the House or the White House. It is all about the Senate,” Cowen analyst Jaret Seiberg wrote in a note, saying that the House vote next week will be symbolic and should demonstrate how much GOP support cannabis legalization has in the chamber. Lesser measures targeting cannabis banking may have a somewhat better chance of passage, according to policy analysts.

It’s been an optimistic week for pot stocks. Two acquisition deals announced earlier in the week sparked the initial rally in the sector with Cresco Labs agreeing to buy Columbia Care for about US$2 billion, and Aurora Cannabis’s purchase of TerraFarma Inc., owner of craft cultivator Thrive Cannabis.

While most marijuana stocks are still in the red this year, Tilray’s shares are now about 22 per cent higher in 2022 and Sundial is up 40 per cent.