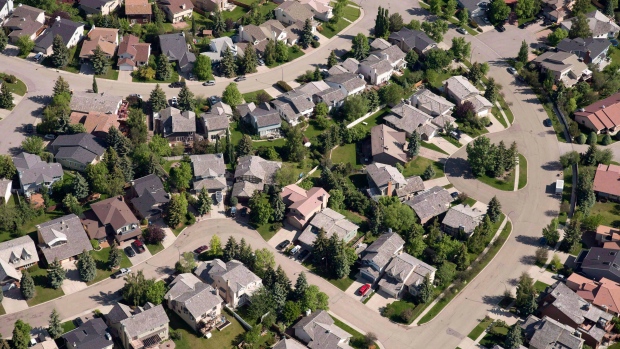 An aerial view of houses in Calgary , The Canadian Press

As property values surge in Toronto and Vancouver, a Calgary asset manager with about $1.1 billion (US$840 million) is making a contrarian bet on the Canadian prairie.

Avenue Living Asset Management Ltd., whose clients include private family offices and small institutions, owns and operates properties across Western Canada. After raising $205 million in equity this year to buy and improve apartment units, commercial space and agricultural land, the closely held company is out to raise as much as $200 million more over the next 12 months to expand in the region.

Cities such as Calgary and Edmonton have missed much of the 45 per cent gain in Canadian home prices in the past five years after the 2014 oil price crash shuttered businesses and cut jobs. While the Vancouver and Toronto regions have both soared more than 60 per cent, Calgary and Edmonton have risen only 4 and 1 per cent, respectively. Demand for rental units has been soft as well.

“We played where no one else wanted to, which typically was the secondary and tertiary markets,” Anthony Giuffre, chief executive officer of Avenue Living, said in an interview. “We’ve gone outside of oil-centric areas, and we’ve managed to find valuable acquisitions.”

As a result, the firm has produced historical annual returns of 8 to 12 per cent, Giuffre said, declining to provide projections.

Apartment owners in the region typically have held on to their properties for years and are lowering rents to try to keep their units full amid slower demand, Giuffre said. That’s given Avenue Living the chance to purchase real estate at a discount based on forecasts of its future yield and to build up its value to raise rents down the line, he said. Giuffre largely targets assets in markets such as Calgary, Saskatoon and Edmonton.

“We learned how to best spend capital on the assets and how we can, over a longer period of time, create the rents that show real returns back to our investor base,” Giuffre said.

That includes the CEO himself. According to Avenue Living, he’s among the three founders who together hold more than half of the company’s equity.