Meme stocks back in the spotlight

Bed Bath & Beyond Inc.’s spectacular rally is drawing in a record hoard of cash from retail investors, who are pumping their bets on popular social media websites and trader chatrooms.

Retail traders bought an all-time high of US$73.2 million of the stock on Tuesday, bringing their total net purchases in three weeks to US$171.4 million, according to data compiled by Vanda Research. What’s more, the most actively traded derivative for the stock is betting on it to nearly double from Wednesday’s close to US$45 by the end of the week, Bloomberg data show. 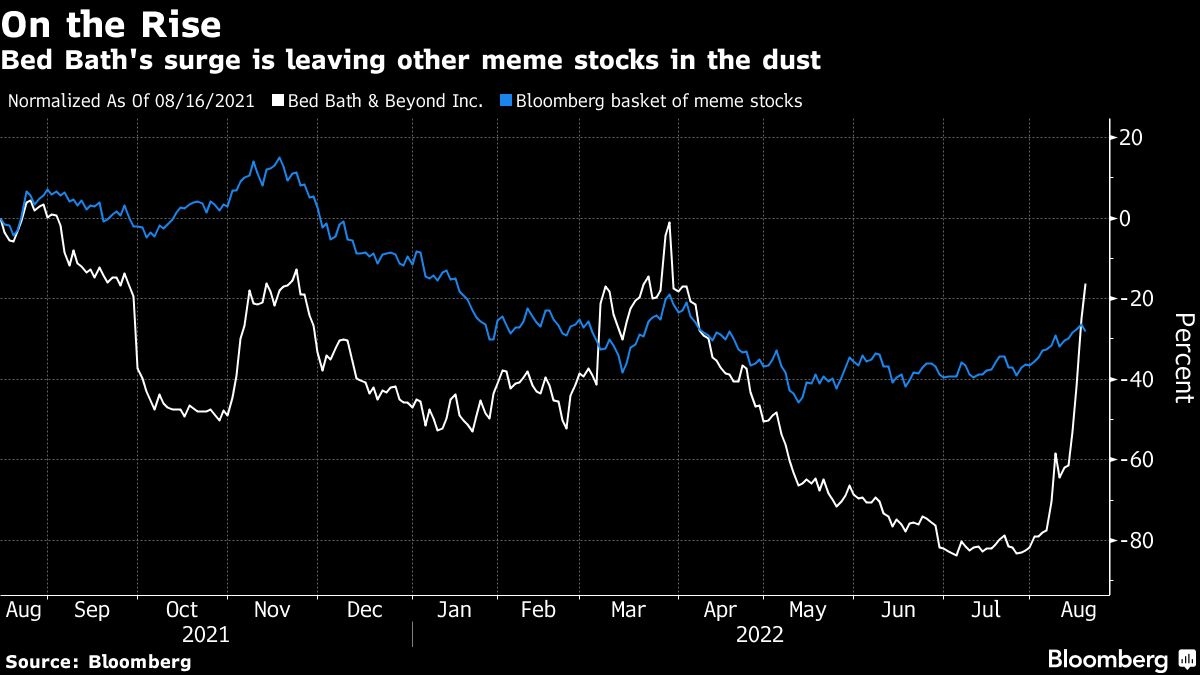 The shares powered higher by 12 per cent on Wednesday to close at US$23.08, with more than 240 million shares changing hands -- more than five times the average of the past month. The stock’s 402 per cent surge from a late-July low has come with a record 1.3 billion shares traded, data compiled by Bloomberg show.

Shares fell 8 per cent in post-market trading as investors circulated a filing that showed Ryan Cohen’s RC Ventures LLC filed for the potential to sell 7.78 million shares as well as some call options.

The retail crowd has also added to bets on some of their other favorite meme stocks like AMC Entertainment Holdings Inc. and GameStop Corp., in recent sessions. However, net purchases of the original meme stocks pale in comparison to the mania seen in January 2021.

Fidelity customers snapped up Bed Bath & Beyond in Wednesday’s session with the stock being the most purchased asset on its platform. Buy orders for the retailer markedly outpaced those to sell, and the net purchases were more than double the size for Tesla Inc., the next most-bought stock.

That demand mirrors the optimism expressed on day trader chatroom StockTwits where Bed Bath & Beyond has the number one trending ticker and on Reddit’s WallStreetBets where it continued to be the most discussed company.

While the meme stock rally may gain traction for a while, it will ultimately fade, according to Vanda Research’s Head of Data Giacomo Pierantoni.

“Meme stocks rallies in a bear market are generally not sustainable,” he said by email. “Any retracements will scare retail traders, as they can’t cope with additional losses given the terrible 2022 performance.”

The group’s rally on Wednesday stood out against a sea of red for equity markets. The S&P 500 Index fell 0.7 per cent while the tech-heavy Nasdaq 100 Index slipped 1.2 per cent.