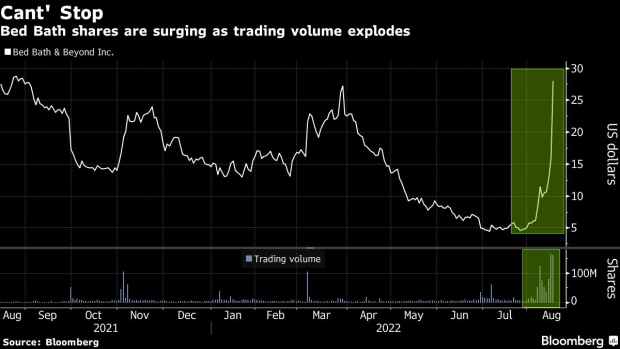 (Bloomberg) -- The 349% three-week surge by Bed Bath & Beyond Inc., which has helped reinvigorate a wave of meme stock buying, stands in the face of Wall Street banks sounding the alarm on the stock’s lofty valuations.

The buying spree extended Tuesday as the stock soared as much as 79%, before trimming gains to 29% and closing at $20.65 after a pair of trading halts. The stock was the most actively traded company as 385 million shares changed hands, more than 20-times the three month average, Bloomberg data show.

The rally has come even as at least three Wall Street banks downgraded the home-goods company and recommended investors sell the stock amid the “meme stock frenzy.”

None of that stopped the surge in buying from the retail trading crowd which has pushed $99 million into the stock since July 26, according to data compiled by Vanda. The net inflow includes a record $46 million on Monday when the stock spiked 24% to close at the highest since late April, the data show.

Some investors are banking on the shares to rise further. Call options betting on the stock to trade above $45 by the end of the week, alongside other contracts betting on a rise to $80 by mid-January, were among the most active derivatives tied to the stock, according to data compiled by Bloomberg.

Bed Bath & Beyond short sellers have been slammed to the tune of $662 million in mark-to-market paper losses this month, including a $218 million blow Tuesday, data from analytics firm S3 Partners show. The stock is “very squeezable” given the crowded short positions, and will likely be driven even higher as short sellers are forced to cover their bets, S3 Partners managing director of predictive analytics Ihor Dusaniwsky said by email.

Fellow meme stocks GameStop Corp. and AMC Entertainment Holdings Inc. also saw a burst in activity. The video-game retailer spiked as much as 15%, triggering a trading halt, as the movie-theater operator erased losses to rise 2.5%.

Bed Bath & Beyond was the most bought asset on Fidelity’s platform as buy orders more than doubled those for Tesla Inc. Its ticker was the most mentioned on Reddit’s WallStreetBets and was trending on popular chatroom StockTwits. Debt tied to the company also rose Tuesday, following the stock higher, and was among the top gainers in the high-yield market.

Even after the surge, the stock remains down 61% from a January 2021 peak, and analysts see more losses on the horizon. The average 12-month price target of $4.49 implies a nearly 80% drop from current levels, Bloomberg data show. Two-thirds of analysts recommend investors sell shares, the largest number in at least a decade.