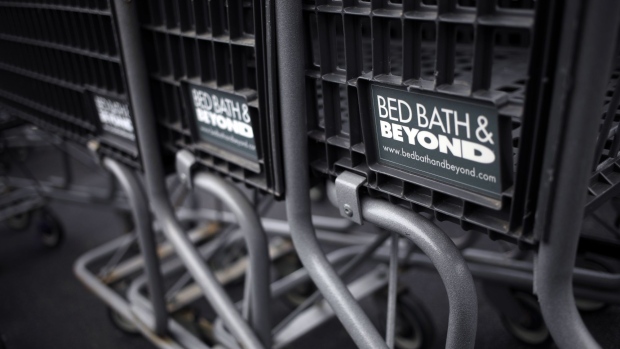 (Bloomberg) -- Bed Bath & Beyond Inc. hired law firm Kirkland & Ellis to help it address a debt load that’s become unmanageable amid a sales slump, according to a person with knowledge of the decision.

Kirkland, typically known for its dominance in restructuring and bankruptcy situations, was tapped to advise the retailer on options for raising new money, refinancing existing debt, or both, according to the person, who asked not to be named discussing private company plans.

Much of Bed Bath & Beyond’s bonds and loans are trading at distressed levels, while an army of retail “memestock” investors sent its shares as high as $30 earlier this week.

The company’s stock fell 27% in late trading, on top of a 20% decline in Thursday’s regular session, after a corporate filing showed that activist investor Ryan Cohen exited his entire position in the company.

Cohen had added three independent directors to the board since disclosing his 9.8% stake in March.

The trading prices of the retailer’s debt, meanwhile, have plunged to half their face value or less this year, with the sharpest drop coming after the company announced dismal quarterly earnings June 29. They dropped anew on Thursday after Cohen’s filing, with the company’s 5.165% note due 2044 sinking 3.625 cents on the dollar to 27.375 cents, according to Trace.

Bloomberg previously reported that Bed Bath & Beyond has been in talks with potential lenders including private credit shops about a new asset-based credit line.

In a filing Thursday, the company said it has been “working expeditiously over the past several weeks with external financial advisers and lenders on strengthening our balance sheet,” and would provide more information at the end of the month.