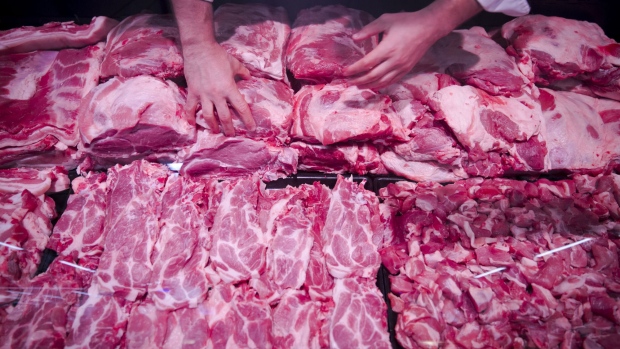 An employee arranges a display of fresh cuts of beef at the butchers counter inside a Super Konzum supermarket, operated by Agrokor dd, in Zagreb, Croatia, on Tuesday, June 13, 2017. , Bloomberg

A large recall of raw beef and veal products continued to expand this week with Canada's food watchdog issuing safety warnings about dozens of items sold at restaurants and retail outlets including Walmart and the gourmet food chain Pusateri's.

At the time, the CFIA said the facility “failed to implement effective control measures.”

A spokesman for the processing facility described the safety concerns solely as “a deficiency in paperwork” and not a matter of improper food handling.

“As CFIA reviewed the paperwork they noticed some gaps in recording of daily procedures and so in an abundance of caution, the company is voluntarily recalling meat products that have been sent out,” said Neil Brodie, vice president of the Ottawa-based public affairs firm Bluesky Strategy Group.

“It looks like some of the employees were not fully trained on what to do.”

A series of CFIA recall warnings over the past several weeks has grown to involve 665 meat products sold on grocery store shelves, as well as 625 items sent to hotels, restaurants, institutions, manufacturers and retailers - products that include variable sizes of steaks, roasts, burgers, bones and organ meats.

The latest recall on Tuesday included a Steakhouse Select brand of cracked pepper beef sirloin roast sold at Walmart in Ontario and Alberta; a Fast Fresh Fabulous brand of bacon-wrapped medallions sold at Overwaitea in British Columbia; and more than a dozen products sold at various Pusateri's Fine Foods outlets in the Toronto area.

“There's 300 employees in the Toronto area who are staying at home not working while this process works its way through,” said Brodie.

The CFIA said there have been no reported illnesses.

Food contaminated with E. coli O157:H7 may not look or smell spoiled but can still cause nausea, vomiting, abdominal cramps and bloody diarrhea. The CFIA advises consumers to throw out recalled products or return them to the location where they were purchased.

The president of Beef Farmers of Ontario said the recall has been hard on producers and family businesses, noting Ryding-Regency Meat Packers Ltd. processes about 1,500 cattle a week and represents roughly 10 per cent of Ontario's processing capacity.

“It's really put a lot of pressure on some people. Those that specifically dealt with (Ryding-Regency Meat Packers Ltd.) are sitting with cattle trying to find alternative markets,” he said, adding that raises concerns about those cattle going to other slaughterhouses and disrupting the marketplace.

So far, Hill hasn't noticed a flood of cattle on the market, but he said the facility's current closure could hit family farms financially.

“Realistically, anything that should have gone to market in the last month needs to find a home in the next month. They're not something that you can really store,” said Hill, adding it costs $3.50 to $4 a day to feed an animal that “is not increasing in value at all.”

“You've kind of got maybe a two-month window that you can market them.”

Cattle that become overweight are not as desirable, he said. This also results in carcasses and cuts of meat that are “just too big,” produce excess trim, and are less efficient for the plant to process, he added.

Considering the size of the recall, food safety expert Jennifer Ronholm said it's amazing no one has fallen ill from affected products.

“Most of them seem to be things that you cook so that's probably a saving grace here,” said Ronholm, noting that most E. coli contamination is on the surface and would be killed off by searing.

Still, she said the infectious dose for E. coli O157:H7 is extremely low and there would be no way to guarantee the infected product doesn't transfer organisms to other kitchen surfaces or foods.

“I wouldn't want E. coli O157:H7 contaminated product in my freezer, fridge, kitchen or oven and I would not recommend that anyone knowingly handle, store, eat, or serve affected meat regardless of how it is cooked,” Ronholm, an assistant professor of Agricultural and Environmental Sciences at McGill University, added in email.

Ronholm says the E. coli strain involved is the same one that forced the largest beef recall in Canada's history when contaminated beef was linked to the XL Foods plant in Brooks, Alta., in 2012, and the same that crippled the town of Walkerton, Ont., in 2000, when its contaminated water supply sickened more than 2,000 and resulted in six deaths.

Ronholm said addressing contamination fears is a complex and time consuming operation, but this case shows that “the system is working.”

“CFIA identified a problem in a plant and instituted a recall before anyone got sick. If you make it through this without anyone getting sick that's a pat on the back for the Canadian system.”