If you want to publicly admit you got fired from your job, Burger King wants to give you a free Whopper.

The fast-food chain kicked off a new advertising campaign Tuesday, saying it will be giving out its flagship sandwich free of charge to anyone who is willing to “confess to getting canned on LinkedIn.”

“Getting fired might not be fun, but at Burger King restaurants getting fired like the flame-grilled Whopper sandwich is always a good thing,” it wrote in a press release.

Burger King says participants who qualify will receive a website link to register and receive a restaurant gift card.

The campaign is getting the thumbs down from marketing and PR experts.

“Especially since it is using a social media channel that is meant for professional networking,” Grosvenor told BNN via email. “This makes public the fact the individual was ‘fired’ on their own personal résumé.”

“While it may seem like a quick and funny viral opportunity, it is making light of the anxiety and depression that comes with job loss. Job loss can [be] as stressful as losing a loved one and, in my humble opinion, shouldn't be made light of with an offer of a Whopper, no matter how delicious the burger.”

“Their desperation for a cute play on words — ‘getting fired’ and ‘fire grilled’ — is too obvious and so falls flat,” Pickard wrote in an email to BNN.

“This crass and crude promotion also runs the risk of PR blowback. We could have a clanger here depending how this flows on social media. There may be more than a few people who go through the hard times of getting fired with whom this campaign may not resonate as intended,” he said.

Burger King says LinkedIn is not part of the campaign.

The restaurant is no stranger to bizarre promotions, according to Doug Stephens, founder of Retail Prophet.

“Burger King has always been known to operate on the absurd fringe of advertising,” Stephens wrote in an email to BNN.

Stephens is less concerned about the campaign turning into a public relations nightmare.

“The play here is interesting in the sense that they're trying to leverage LinkedIn as a social accelerant rather than Facebook, Snap or Instagram, while working to reach a fairly young audience. That said, I don't see any reason for blowback,” he said. 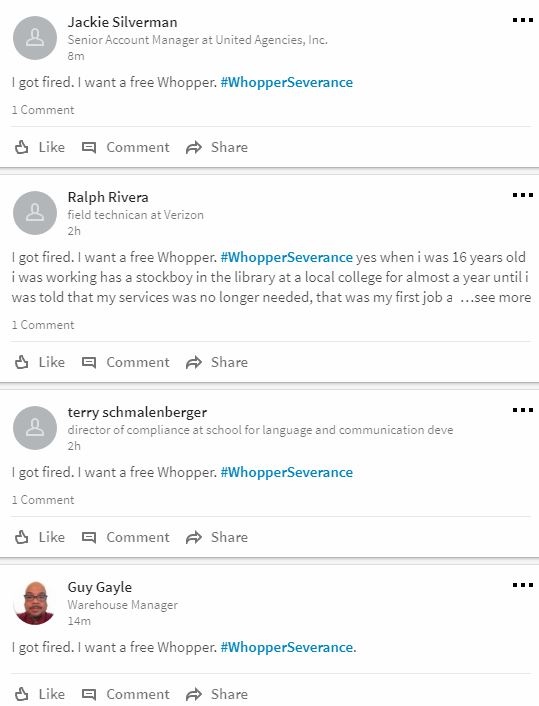