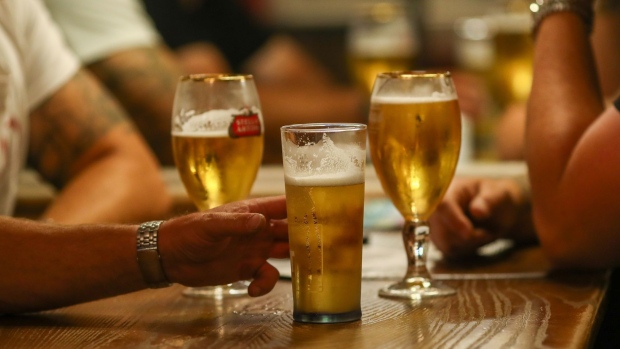 Pints of beer sit on a table at The Moon Under Water pub, operated by J D Wetherspoon Plc, on Leicester Square in London, U.K., on Saturday, July 4, 2020. Restaurants, hotels, cinemas and hairdressers will also be allowed to open their doors again on what has been dubbed 'Super Saturday' after 3 1/2 months of an economic lockdown brought in to contain the outbreak. Photographer: Simon Dawson/Bloomberg , Bloomberg

(Bloomberg) -- Britain’s teetotal finance minister is under pressure to forego hundreds of millions of pounds of alcohol taxes in a bid to boost pubs, clubs and bars that have suffered because of coronavirus restrictions.

Chancellor of the Exchequer Rishi Sunak is crafting a budget he hopes will begin to fix the virus-shaped hole in the U.K.’s finances without strangling the country’s recovery from its worst recession in a century.

Now, days before Sunak delivers his budget statement in Parliament on Oct. 27, more than a quarter of MPs in his own Conservative Party have put their names to a letter calling on the chancellor to freeze alcohol duties. Moreover, they’ve asked him to cut duty on draft beer, to help the hospitality sector compete with supermarkets that sell cheaper drinks.

“Given the important social as well as economic contribution pubs make to the communities we represent, we think it is vital we do more to help them not just survive, but thrive,” the MPs wrote.

If Sunak agrees with the MPs’ request, the eventual bar tab could run to 300 million pounds ($414 million) next year alone. That’s the amount the Office for Budget Responsibility projected in March that the tax take from alcohol duties will rise by next tax year.

In the letter, the MPs acknowledged that a freeze would require higher taxes or lower spending elsewhere, or more government borrowing. “This would, in our judgment, be a worthwhile trade-off,” they wrote.

Sunak, who has repeatedly said he wants to balance the U.K.’s books, is resisting pressure to increase spending because of concerns about inflation. Moreover, he already froze all alcohol duties in March for a second year -- only the third time that’s happened in two decades.

Alcohol duties are levied as fixed amounts relative to volume, rather than percentages, and U.K. governments normally raise rates regularly to keep pace with inflation.

The Treasury last year began a review into the patchwork of duties, which date back to 1643, aiming to simplify what it called an “arguably outdated” system of taxation that raises more than 12 billion pounds a year.