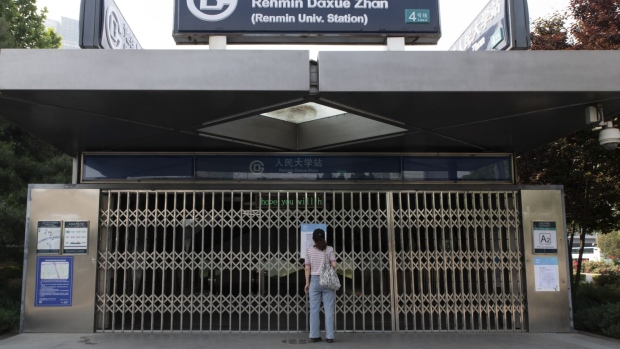 A resident is tested for Covid-19 in Beijing, on May 23. , Bloomberg

(Bloomberg) -- Beijing saw new cases of Covid-19 cases drop Monday after posting a record for this outbreak as the capital remains under a high level of restrictions.

Beijing reported 48 cases for Monday, down from 99 on Sunday, which was the highest daily tally of the current outbreak. While the numbers are still small, the capital has been recording dozens of cases a day for almost a month, suggesting that mass-testing drives and a variety of measures such as work-from-home orders in some districts haven’t been enough to stamp out the spread.

The inability to eliminate Beijing’s outbreak underscores the challenges of China’s strict Covid Zero approach, with the unprecedented shutdown of Shanghai providing a cautionary tale of how early mistakes could lead to rapid spread of a virus China is still trying to wipe out. The strategy has become increasingly controversial in the face of highly transmissible variants, leaving the country isolated and at odds with the rest of the world, which is increasingly living with the virus.

Containing Covid has also come at a crushing social and economic cost. In the latest move to prop up the economy, the government will offer more than 140 billion yuan ($21 billion) in additional tax relief mainly aimed at businesses as it seeks to offset the heavy impact of coronavirus lockdowns on the world’s second-largest economy.

The measures include additional tax rebates to companies and cuts of 60 billion yuan on passenger-car taxes, China National Radio reported, citing a decision from a meeting of China’s State Council, a top government body chaired by Premier Li Keqiang.

Shanghai reported 480 cases on Monday, down from 558 on Sunday. No new infections were found outside of government quarantine in the financial hub.

While Shanghai has been officially easing the lockdown that kept its 25 million residents confined to their homes for almost two months, zealous grassroots volunteers who police housing compounds are still preventing many people from going outside.