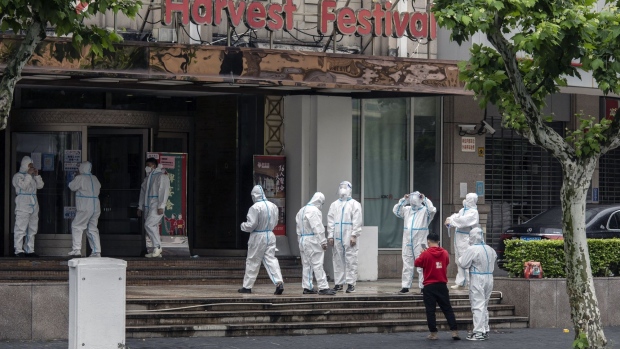 Workers in personal protective equipment (PPE) prepare to enter a building during a lockdown due to Covid-19 in Shanghai, China, on Friday, May 13, 2022. Shanghai's vice mayor said today the city plans to achieve zero community spread by mid-May, allowing it to implement an "orderly opening up." Source: /Bloomberg , Bloomberg

(Bloomberg) -- Shanghai reported one Covid-19 infection in the community with the rest still occurring within quarantined areas, while Beijing said there was a drop in the number of confirmed cases.

The country’s strict Covid Zero policy sees all positive cases and their close contacts isolated in government quarantine sites. The strategy, which relies on a playbook of closed borders, quarantines, lockdowns and mass testing, is leaving China increasingly isolated as the rest of the world lives with Covid and opens up.

Shanghai officials have said that three consecutive days of zero community transmission is required before they can start to ease restrictions. They aim to achieve that in mid-May, the city’s Vice Mayor Wu Qing said Friday.

Beijing added 32 local confirmed cases and 24 local asymptomatic Covid infections on May 13. The capital reported 50 new cases for Thursday. Officials have denied the city will be locked down amid growing concern the Chinese capital’s response to a persistent outbreak is about to be intensified.