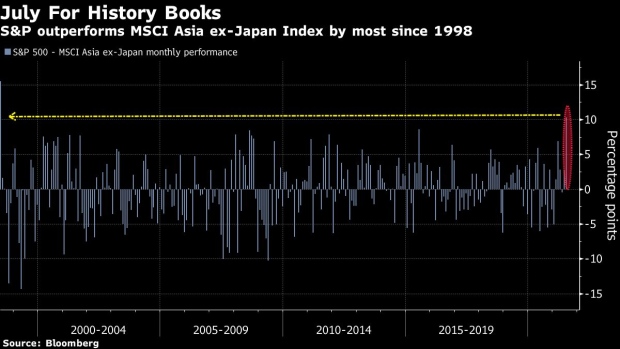 (Bloomberg) -- There’s been a growing sense in some Wall Street circles that the “America First” trade was just about played out in the stock market. After all, U.S. equities had become markedly more expensive than global peers, and with Covid vaccination rates in other parts of the world starting to catch up to U.S. levels, it was only a matter of time, the thinking went, before more money poured into those economies instead.

But Beijing’s crackdown on tech and education companies, which has sparked a spectacular rout in Chinese stock markets this week, blindsided investors so badly that some are suddenly re-assessing their plans to carry out this shift.

There may be some very China-specific elements to the whole saga -- like a crackdown on Jack Ma’s internet empire and ride-hailing giant Didi Global Inc. -- but it still underscores the broad risks that come with moving money out of a market that has minted stellar returns for years and into places across the globe with weaker fundamentals. U.S. economic policy has a certain predictability and stability that is comforting to investors at a time like this.

“With China, you just don’t know what’s going to happen tomorrow,” said Tim Ghriskey, chief investment strategist at Inverness Counsel LLC. “It’s not that we don’t have a regulatory risk in the U.S., but here there is a legal process. In China, it’s at the flick of a switch.”

U.S. stocks have been sitting on top of the world for years, first by surfing their technology companies’ dominance, then, during the pandemic, by leading the way in distributing vaccines that allowed businesses to reopen. The MSCI USA Index, which has doubled in value since last March, is trading at 22 times projected profits, a 28% premium to a gauge of global equities that excludes the U.S.

The latest crackdown on Chinese tutoring companies served as a reminder that global stocks are likely trading at a lower multiple for a number of reasons, from higher geopolitical risk to corporate governance headwinds to occasional liquidity constraints. Then there is a whole new level of regulatory risk that comes with investing in China.

Since pulling out of the nation in June 2020 and going almost all-in on U.S. stocks, Ghriskey has been considering a comeback to the Asian nation’s market. He thought about it when Donald Trump lost the election, when the Asian nation’s infection rate hit near-zero and when data confirmed booming growth. He just couldn’t pull the trigger.

Ghriskey is most likely not the only one. To Paul Krake, founder at investment research firm View from the Peak, a lack of clarity about when the regulatory crackdown is going to end makes it impossible to time a China dip-buying bet. To Gordon Johnson, chief executive officer of investment advisory firm GLJ Research, it’s a risk not worth taking at all.

“Owning U.S.-listed Chinese companies is extremely risky now,” Johnson said by phone. “What we’ve learned is effectively don’t own anything.”

The MSCI Asia ex-Japan Index that’s 43% invested in China is on track for the best month since 1998 relative to the S&P 500. That’s also pushed the MSCI World ex USA Index on track for its fourth consecutive year of trailing the S&P 500, the second-longest streak ever. The benchmark U.S. index fell on Tuesday.

Heightened regulatory anxiety has pushed pushed U.S. investors to unload their exposure in China. The KraneShares CSI China Internet exchange-traded fund has lost almost a quarter of its value since Friday. The largest U.S.-listed exchange-traded fund invested in H shares fell 12% over the past three days. Alibaba Group Holding Ltd, whose market capitalization at some point rivaled that of Amazon.com Inc., has tumbled 11% so far this week.

Investor moods around China have soured despite data showing solid fundamentals in Asia’s powerhouse and the second-largest economy in the world. The nation’s economy grew 13% in the first half of this year, according to government data, as post-coronavirus recovery continued to firm and more parts of the economy returned back to normal. To Roukaya Ibrahim, a Canada-based strategist at BCA Research Inc, it’s still not worth taking the risk.

“The question for investors is whether the selloff presents an attractive opportunity to bottom fish,” Ibrahim said in a note Tuesday. “We argue otherwise and expect further pressure from regulators to continue to weigh down on Chinese stocks over a six- to 12-month horizon.”