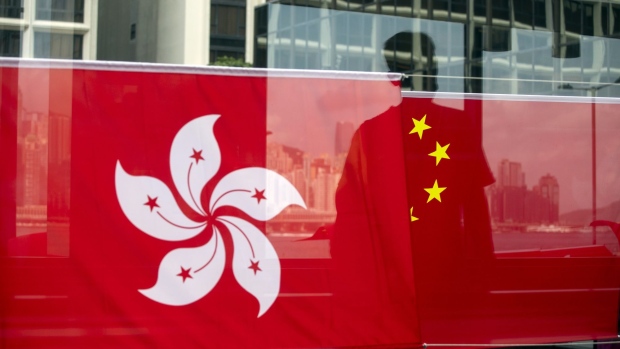 A pedestrian is reflected in a window as the flags of China and Hong Kong Special Administrative Region (HKSAR) hang from buildings during the anniversary of Hong Kong's return to Chinese in Hong Kong, China, on Thursday, July 1, 2021. Hong Kong's leader pledged to press ahead with an unprecedented national security crackdown, as the Asian financial center marked a series of fraught anniversaries symbolizing Beijing’s tightening grip over local affairs. Photographer: Paul Yeung/Bloomberg , Bloomberg

The Hong Kong and Macau Affairs Office’s new propaganda department will focus on communicating news, while managing journalists from the two special administrative regions based in the mainland, according to the agency’s website. The second department will coordinate matters related to national security.

The changes were added to an organization summary on the Beijing-based office’s website Thursday, according to local news outlets the South China Morning Post and Sing Tao.

Zeng Jian, 52, and Wang Zhenmin, 55, will head the propaganda and security departments, respectively, according to the publications, citing individuals familiar with the matter. Both men have significant experience at the HKMAO and the Liaison Office, the central government’s top body located in the former British colony, the SCMP reported.

Beijing’s bolstering of the office from seven departments to nine comes as it steps up direct control of Hong Kong, following the often violent 2019 anti-government protests. Since then, China has imposed a sweeping national security law on the city and implemented an electoral overall to ensure “patriots only” rule, which together have wiped opposition from the legislature and squeezed space for any public dissent.