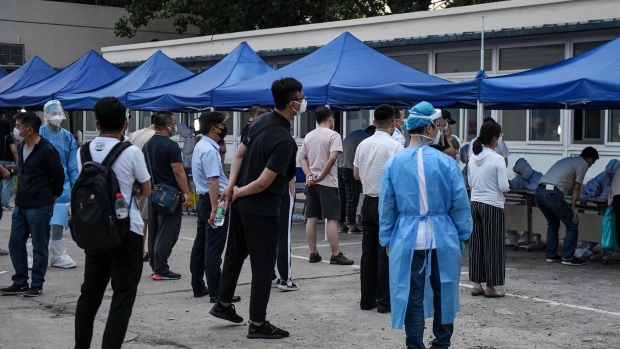 People who had their car number plates recorded in the area of the Xinfadi market where a new COVID-19 coronavirus cluster emerged last week, wait in line to do swab tests for the coronavirus at a testing centre in Beijing on June 17, 2020. , Greg Baker/AFP/Getty Images

The peak of Beijing’s new coronavirus outbreak has already passed and further infections should be “sporadic,” said the country’s chief epidemiologist, as China seeks to project confidence over a resurgence of cases that’s plunged its capital into a partial lockdown.

The 21 new reported infections on Thursday all contracted the virus before June 12 and the “peak” of the outbreak was on June 13, said Wu Zunyou, chief epidemiologist at China’s Centers for Disease Control and Prevention, at a briefing in Beijing on Thursday.

The findings are based on a curve reflecting when infected patients began to show symptoms, he said, but did not elaborate on how experts ascertained the outbreak’s peak.

“The fact that it’s contained does not mean there will be no more infections reported tomorrow,” said Wu. “We will still see more cases reported in the coming days, but that’s a gradual process revealing the past infection period. New infections are only sporadic.”

At least 158 people have been infected in a new outbreak that erupted this week after a lull of two months with no cases in China’s most important city. Officials are grappling with striking a balance between containment and keeping the economy running in the city of more than 20 million, where the country’s business and political elite reside.

While schools have been closed and travel tightened, an across-the-board lockdown has not yet been enacted. Such a move would risk undoing some of China’s economic re-opening and undermine confidence in the government’s ability to handle the pandemic. Tension is high across the city as residents who had thought it was safe enough to take off their masks and resume normal life are now fearful of infection again.

Wu said it was not coincidental that outbreaks keep happening at wet markets, although the origins of the deadly pathogen is still a mystery. The Beijing outbreak started at Xinfadi, the city’s largest wholesale market, while a wet market in the central Chinese city of Wuhan was the first site of mass infection last December.

“Most infected cases found in the market are seafood vendors, followed by beef and lamb sellers,” he said. “Our initial analysis is that the virus is more likely to survive in water and low-temperature environments, but the reason for its emergence needs more research.”

Wu said that infected seafood sellers showed symptoms earlier, and sampling results indicate that contamination is more severe in places where seafood and meat are sold. The Beijing outbreak has led to a nationwide salmon boycott after the market said it traced the virus to the chopping board of a salmon vendor, but experts have said there’s no evidence that food can transmit the virus.

China customs has conducted virus tests on more than 32,000 samples of imported seafood, meat, vegetables, fruit and other foods and all were negative, it said in a statement on Thursday.