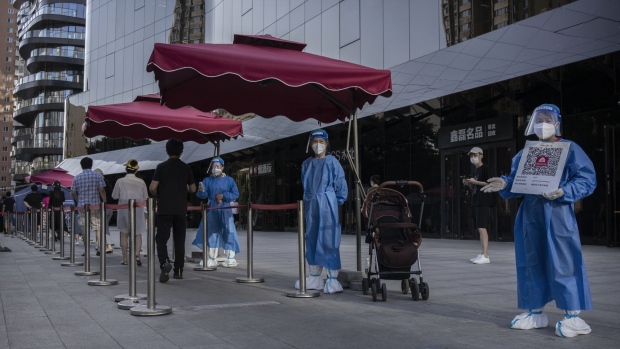 Residents line up at a Covid-19 testing site in Beijing on May 25. , Getty Images via Bloomberg

(Bloomberg) -- Beijing’s monthlong Covid-19 outbreak continues to simmer along, with restrictions in the capital and Shanghai exacting a heavy economic toll.

Beijing reported 45 new cases for Wednesday, compared with 47 on Tuesday. While the numbers are still low, Beijing has been recording several dozen infections a day for just over a month, suggesting mass-testing drives, work-from-home orders in some districts and other Covid Zero measures haven’t been enough to extinguish the outbreak.

The city’s persistent infections underscore the challenges of achieving Covid Zero, and have swiftly turned the capital into a key area of focus for authorities as Shanghai’s outbreak ebbs. Premier Li Keqiang on Wednesday said China’s economy is in some respects faring worse than in 2020 when the pandemic first emerged, and urged efforts to reduce a soaring unemployment rate.

Read more: China Economy Worse Off in Some Ways Than 2020, Premier Says

Beijing’s education commission on Wednesday said in-person school classes will remain suspended due to the outbreak. Middle and elementary school students in the capital will continue to have learn from home, a spokesman for the city’s education commission said. College and university students will be allowed to return to their home towns.

Meanwhile, Beijing’s health chief Yu Luming, who was under investigation for suspected legal and disciplinary violations, has been removed from his post, the Beijing Daily reported. His ouster comes after Beijing punished a dozen officials over two Covid-19 clusters.

Shanghai reported 338 new cases, down from 387 on Tuesday. No infections were found outside of government-run quarantine in the financial hub. China isolates all Covid cases and their close contacts as a way of stemming transmission.

While Shanghai has been officially easing the lockdown that kept its 25 million residents confined to their homes for almost two months, zealous grassroots volunteers who police housing compounds are still preventing many people from going outside.