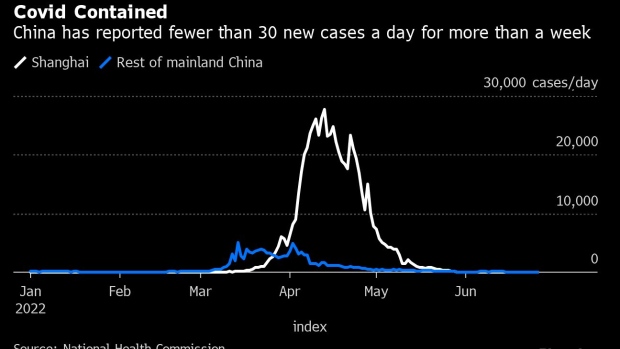 (Bloomberg) -- China’s Covid Zero policy looks to have successfully brought the spring outbreak under control, with new infections under 100 a day for almost two weeks, no major cities in a widespread lockdown, and more provinces reporting no cases at all.

Nationwide, China is reporting the lowest number of new cases since early February. Of its top 50 cities by economic size, only one district in Shenzhen has widespread restrictions in place. Recent outbreaks in Beijing and Inner Mongolia look to have been quashed.

Shenzhen’s Futian district was locked down for three days from Saturday after five local cases were found on Friday, with non-essential businesses shut and residents ordered to stay in their compounds. The city didn’t report any new local infections for Sunday and, as of Monday morning hadn’t given an update as to whether the lockdown will be extended.

The technology hub’s outbreak comes ahead of a potential two-day visit by Chinese President Xi Jinping for the 25th anniversary of Hong Kong’s handover and the swearing-in ceremony for incoming chief executive John Lee. If the visit happens, Xi wouldn’t stay overnight in Hong Kong and instead return to Shenzhen each evening, SingTao reported, citing people familiar with the matter they didn’t identify.

Dandong, on the border with North Korea, continues to see sporadic infections as the city gradually eases restrictions after a two-month lockdown. Officials warned there was a persistent risk of flareups, and residents need to have negative PCR test results within 48 hours to be able to move within the city. Dandong reported six local cases Sunday.

At least 20 cities in China have reduced testing requirements or canceled regular mass PCR testing in recent weeks, according to a research note by Soochow Securities. The need for regular testing has decreased as the case count dropped and the testing was unnecessarily adding to government’s costs, said the research note.