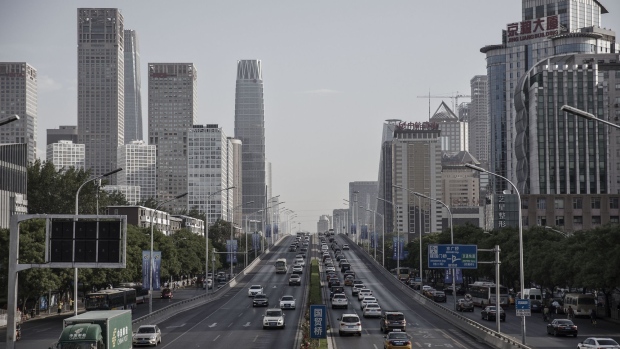 Vehicles travel along a section of the 3rd Ring Road in Beijing, China, on Monday, May 15, 2017. China's economy is staging a comeback as quickening inflation boosts factory profits, while stricter capital controls and a stabilizing currency help stem outflows. Photographer: Qilai Shen/Bloomberg , Bloomberg

The State Council, the equivalent of China’s cabinet, approved Beijing joining the trial, according to people familiar with the matter, who asked not to be named because they weren’t authorized to speak publicly. Shanghai City and the southern province of Guangdong have announced they’ve already started trials.

The Ministry of Finance didn’t immediately respond to a faxed request for comment.

Hidden debt, or off-balance sheet borrowing that carries an implicit government repayment guarantee, has long been a threat to China’s financial stability, partly because it’s unclear how much debt there actually is. Authorities elevated it to a “national security” issue earlier this year, indicating greater determination to curb unregulated lending.

Neither Guangdong or Shanghai disclosed how they intend to achieve the goal, but earlier this month Guangdong’s government issued five refinancing bonds to raise 75 billion yuan ($11.7 billion). The proceeds will be used to repay existing debt, according to the issuance filing.

This could be related to the province’s trial to cut hidden debt, according to Huaxi Securities Co. Ltd. analyst Fan Xinjiang, who wrote that refinancing bonds could be become a major way to help governments to achieve this goal.