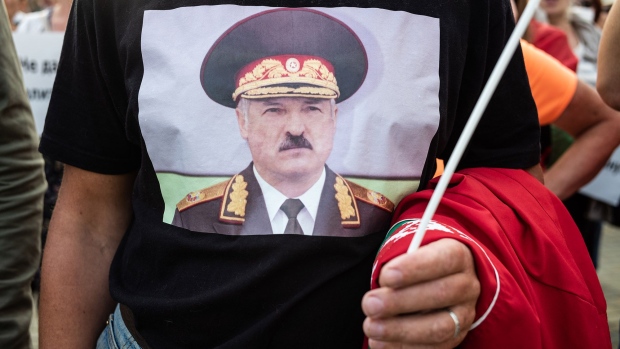 No sign of backing down. , Photographer: Misha Friedman/Getty Images Europe

President Alexander Lukashenko’s Soviet-lite regime in Belarus has been dealt a blow from which it will not recover. Unfortunately, Russia can keep it on life support for some time to come.

Thousands of demonstrators filled the streets of Minsk again last weekend, and the outrage remains palpable. That, unfortunately, may not matter. The Kremlin’s now overt backing has emboldened the collective farm boss-turned-autocrat. If he hangs on, Belarus will pay the price.

Left fighting for survival after claiming an implausible landslide victory three weeks ago, Belarus’ strongman responded true to form with a violent crackdown and thousands of arrests. But as protests and strikes spread, Lukashenko appeared to teeter on the edge. At one point, he traveled to a state-owned factory — to visit the very people who once credited him with saving their jobs — only to find them chanting “leave” when he addressed them, a scene reminiscent of Romanian dictator Nicolae Ceausescu’s last speech in December 1989.

Yet while Ceausescu was ousted days later, the 66-year-old Lukashenko has dug in.

He is now sending increasingly belligerent signals — none more desperate than footage of the president stepping off a helicopter wearing a bullet-proof vest and carrying a gun, accompanied by his teenage son in combat gear. He has spoken, without evidence, of foreign forces massing on the border.

Reporters and strike leaders have been detained, and the opposition’s coordination council for the transition of power is under investigation. Representatives including Nobel Prize-winning author Svetlana Alexievich have been questioned.

Over the weekend, the government expelled foreign journalists covering the ongoing demonstrations. None of that points to a leadership about to yield. Lukashenko has Moscow to thank.

Russian President Vladimir Putin has no good options when it comes to Belarus. He doesn’t want a democratic movement on his doorstep, but has been loath to support a fickle ally and is wary of alienating a population broadly well-disposed towards Russia. Still, last week, the risk of inaction appeared to have become too great. In a televised interview on Thursday, Putin was unambiguous. With a cursory nod to the will of the Belarusian people, he made clear Russia could not be indifferent to the fate of its “closest” neighbor, and would step in if required. Lukashenko, he hinted, had made enough concessions.

This was not just a threat. It was a signal of support for the security apparatus on which the entire Lukashenko edifice is built — and should be read as such. That doesn’t mean military intervention is impossible, but this is not Ukraine. In Belarus, Russia is propping up an unpopular autocrat, and Moscow doesn’t need tanks for that. Indeed, it has already sent in journalists to keep state television going, and left its fingerprints on a government narrative that increasingly talks up a non-existent outside menace.

The West has so far acted with caution, rightly wary of provoking Moscow. It has called for new, fair elections. Yet it has little leverage and initial sanction efforts look unlikely to change minds, while emboldening Lukashenko to threaten to leverage the country’s strategic geographic position and cut off the flow of European goods to Russia.

It’s a poor sign for what lies ahead, with tougher punishment looming. Russia can keep a zombie regime breathing, but it will struggle to do more  — even if it goes ahead with gestures like supporting the crumbling Belarusian ruble by refinancing US$1 billion of debt or encouraging tycoons to invest.

This episode will certainly mark the end for a Belarusian economic miracle. The regime’s brutal crackdown and a willingness to cut off the internet at will — costing the country more than US$56 million per day, according to Netblocks figures cited by the Financial Times — has irreparably damaged the prospects of a technology and outsourcing sector that flourished despite the command economy, supporting successes like messaging app Viber. It amounts to roughly 6 per cent of Belarus's gross domestic product but created a disproportionate number of new jobs, and fed hope. A brain drain is already under way.

Konstantin Sonin of the University of Chicago Harris School of Public Policy compares the potential near-term outcome to the fate of Transnistria, a Russian-speaking strip of land between Ukraine and Moldova that broke away as the Soviet Union collapsed. It remains unrecognized and, for many outside the region, unrecognizable. Moscow’s support has helped it survive, but hardly thrive.

In the short term, it’s hard to be optimistic for Belarus when writing from Hong Kong, where very similar popular demonstrations filled the former colony’s streets for much of last year, until they were silenced by riot police using rubber bullets and tear gas, plus the imposition of a national security law.

What is clear is that living at Putin’s pleasure will not make for a stable future for Lukashenko. He’ll be buffeted by inevitable economic stagnation, possibly becoming too much of a drag for Moscow. Belarus’s protesters will get the change they voted for on Aug. 9. It may just take time.