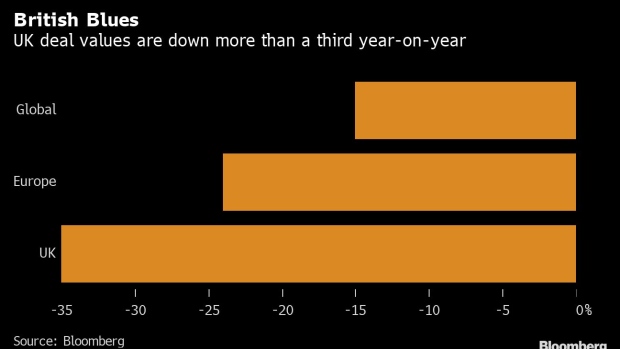 (Bloomberg) -- British dealmakers are enduring a bruising end to the first half of 2022, with about $20 billion of mergers and acquisitions falling apart in just a matter of weeks.

Both deals were hurt by muted buyer interest and disagreements over price, people with knowledge of the matter said. The end of easy money also meant that suitors weren’t able to offer the punchy prices being demanded by the sellers, according to the people, who asked not to be identified because the information is private.

Two rival investor groups dropped their pursuit of former British tech darling THG Plc earlier this month, while the preferred bidder for high street fashion brand Ted Baker Plc also walked away. The stalled transactions are driving an increasing feeling that while cheap British companies are attracting plenty of bargain hunters and tire kickers, many suitors are having trouble getting deals over the line.

UK mergers and acquisitions have already slowed more than other parts of the world, with volumes down 35% year-on-year to $228 billion, according to data compiled by Bloomberg. That’s notably more than the 24% drop off across Europe.

Even before this week, there were signs that the Boots and Reckitt divestments were struggling. Walgreens gave suitors extra time to firm up their offers, and one of the two serious parties in the race was preparing to walk away due to price disagreements, people with knowledge of the matter have said. Reckitt’s planned disposal had attracted muted interest amid turmoil in the US baby formula industry, Bloomberg News has reported.

Other deals have also been scuppered, including British visual effects studio DNEG’s planned $1.7 billion merger with a blank-check company and the $2 billion sale of UK holiday park operator Parkdean Resorts. Much of the slump is due to a worsening credit market that’s hurting buyers’ ability to secure the funds needed to complete big deals.

Banks have been cutting their exposure to leveraged loans for risk of being saddled with debt they can’t then sell on to investors. A number of lenders were burned when they had problems offloading £6.6 billion of debt tied to a private-equity buyout of supermarket chain Wm Morrison Supermarkets Plc.

Financing for other transactions is now in focus, including the £5 billion sale of UK gas station operator Motor Fuel Group Ltd. Debt is still available -- particularly more expensive forms of capital from increasingly aggressive private credit funds. The question now is whether sellers will adjust their expectations or put more deals on hold to wait for the money to start flowing again.

To be sure, the fundamentals of the British market remain attractive compared with other countries like the US. While financing markets are jittery, certain pockets of capital are willing to make bets -- including infrastructure funds that have raised billions of dollars to snap up everything from bus operators to wireless towers. Bankers are hoping that sentiment will snap back after a brief hiccup, allowing the deals to keep flowing the way they did even in the depths of the Covid-19 crisis.