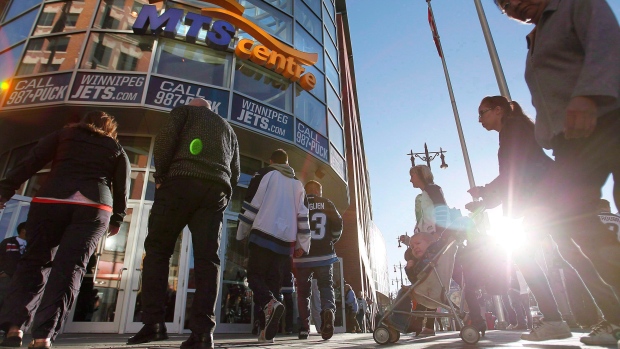 Fans enter the MTS Centre prior to the pre-season NHL action between the Winnipeg Jets and Ottawa Senators in Winnipeg on Sept.15, 2013. , THE CANADIAN PRESS/John Woods

A deal between Canada Life Assurance Co. and the owner of the Winnipeg Jets will see the hockey team's home arena renamed to the Canada Life Centre.

The venue, currently called the Bell MTS Centre, will be renamed as of July 1 in a 10-year sponsorship deal with the building's owner, True North Sports and Entertainment.

The renaming deal comes as Canada Life continues to try and raise its profile across the country.

Canada Life president and chief operating officer Jeff Macoun says the company will benefit by having their name on the national stage during Winnipeg Jets home games.

"We're thrilled to have this relationship with True North, it really is part of our business growth strategy to strengthen our brand in the Canadian marketplace," said Macoun.

"It was important for us that this was not only local in the province of Manitoba where our head office is … but it also allows us to have a large and wide national presence from coast to coast to coast, because the Winnipeg Jets are prominently featured in national games."

True North's executive chairman Mark Chipman said he is pleased the arena is being renamed with a company that shares a commitment to both the local community and the country.

"We are proud to call the home of our Winnipeg Jets and Manitoba Moose, Canada Life Centre, and look forward to associating the Canada Life brand with exciting moments in hockey and entertainment," said Chipman in a statement.

"There's a very deep sense of community in their DNA and everything they do."

The company has more than 12 million customers across Canada, with more than 3,000 employees in its Winnipeg head office.

True North also announced Tuesday a new multi-year partnership with Bell MTS, renewing it as an official partner of the Winnipeg Jets and Manitoba Moose and official telecommunications provider of their home venue.

The agreement also includes new behind the scenes content produced by True North and exclusive to Bell.