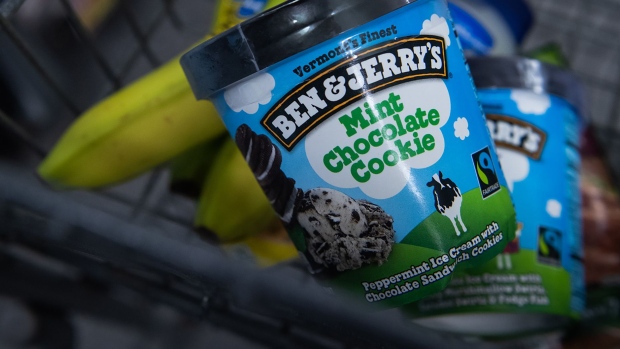 (Bloomberg) -- Ben & Jerry’s has “no power and no authority” to sue its own corporate parent in its efforts to avoid selling its ice cream in the Israeli-occupied West Bank, a lawyer for Unilever Plc told a judge in New York.

Ben & Jerry’s claims in a suit that Unilever’s sale of its brand and trademark in Israel to a local company violated the 2000 agreement by which the consumer products giant acquired the Vermont ice cream maker. The deal provided for Ben & Jerry’s to maintain an independent board to safeguard its brand and reputation, which it now says has authority to sue to Unilever.

“This board has only those powers that are expressly and specifically given to it,” Unilever attorney David Marriott said Monday in a phone hearing before US District Judge Andrew L. Carter Jr. in Manhattan.

Those powers don’t include the ability to sue Unilever, its “single, 100% shareholder,” Marriott said. He also argued that the point is moot, as the sale closed on June 29, before Ben & Jerry’s filed its suit.

Ben & Jerry’s last year triggered a political controversy in Israel when it said it would halt sales in Jewish West Bank settlements, citing human rights concerns. The company has a history of publicly embracing socially progressive causes, including same-sex marriage and the Black Lives Matter movement.

Joseph Ahmad, a lawyer for Ben & Jerry’s, argued on Monday that such stances were integral to the brand that the board is authorized to protect. “This is an American institution that has built it’s reputation on the authenticity of its social mission,” he said.

The West Bank boycott drew criticism from the Israeli government and also resulted in several US pension funds, including those managed by the states of New York, Illinois, New Jersey, Florida and Texas, divesting their stakes in Unilever.

Ben & Jerry’s said its board voted 5-2 on July 1 to sue, with the two Unilever-appointed members voting no. Progress in the case was suspended for two weeks while both sides explored the possibillty of settlement with a mediator. They informed the judge last week that discussions had broken down, setting up Monday’s hearing.